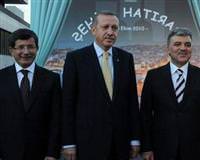 PRESIDENT ABDULLAH GÜL'S STATEMENT
Regarding the decision reached by the United Nations Security Council, President Abdullah Gül states, "This is now an issue of international legitimacy, we are of the opinion that it would be right to act within this framework."
Meanwhile, noting that Turkey is a country dependent on external forces for energy, President Gül also stated, "It would not be right for Turkey to all of a sudden state that we have changed our minds regarding nuclear energy."

PRIME MINISTER ERDOĞAN'S ANNOUNCEMENT
Prime Minister Recep Tayyip Erdoğan states, ''The trouble faced by Libya today is also our trouble. We want the ongoing conflict in Libya to come to an immediate standstill and want the disproportionate force used against innocent civilians to be brought to an end immediately. We want the sides in Libya to place their hands on their hearts and to think again and again."

MINISTER OF FOREIGN AFFAIRS AHMET DAVUTOĞLU
Foreign Affairs Minister Ahmet Davutoğlu stated that Turkey has adopted the UN resolution on Libya and is ready to for any step to be taken to halt the loss of civilian lives. Davutoğlu states, "We hope that after this decision the attacks will stop, the bloodshed must come to an end as soon as possible."