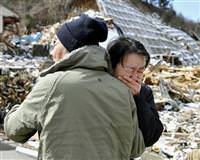 The following is a list of the likely impact of and response to the devastating earthquake and tsunami that rocked the northeast coast of Japan on Friday, and subsequent crisis at nuclear power plants.

* The death toll is expected to exceed 10,000, with northeastern prefectures of Miyagi, Iwate and Fukushima most severely hit. At least 6,911 people were confirmed dead, exceeding 6,434 who died after the Kobe earthquake in 1995. But 10,692 people are still missing, National Police Agency of Japan says on Friday.

* More than 410,000 people in 12 prefectures have been evacuated and are staying at shelters, Mainichi news paper reports on Friday. Hundreds of people are waiting for help in isolated areas and have no access to food.

* About 287,000 households in the north are without electricity in near-freezing weather as of Friday afternoon, Tohuku Electric Power Co. says.

At least 940,000 households are without running water, according to the Health Ministry.

* At least 87,772 buildings have been damaged, National Police Agency of Japan says on Friday.

UBS expects Japan's economy to grow 1.4 percent this year, compared with its previous forecast of 1.5 percent expansion. But it upgraded its growth forecast for 2012 to 2.5 percent, up from the previous estimate of 2.1 percent.

- Goldman Sachs expects total economic losses is likely to hit 16 trillion yen, while it expects real GDP to decline by 0.5-2 percent in the second quarter.

* According to Japanese foreign ministry, 117 countries and 29 international organisations have offered assistance. By Thursday, teams from 14 countries/regions have arrived to help, though some have already left. A team of experts from the International Atomic Energy Agency (IAEA) arrived on Friday.