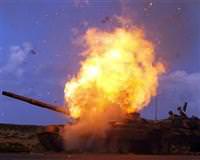 An elaborate shadow boxing match is under way over whether NATO should take command of military operations in Libya, but it suits both the United States and France to keep the Western alliance out of the limelight.

Washington, keen to extract itself from two other wars in the Muslim world, wants as low a profile as possible in the North African conflict, even though it has quietly taken the lion's share of missile and air strikes so far, diplomats say.

Paris believes that putting the U.S.-led defense alliance in charge would alienate the Arab world, already alarmed by the first bombs falling, and burn bridges with Russia, China and developing nations that let the U.N. resolution pass.

"The Arab League does not wish the operation to be entirely placed under NATO responsibility. It isn't NATO which has taken the initiative up to now," French Foreign Minister Alain Juppe told reporters at a European Union meeting in Brussels.

"It's a coalition of countries leading the operation, so political control ... is exercised by this coalition, in which Arab, North American and European countries are participating," he said, adding NATO might play a role in planning and execution as the mission unfolded.

French officials said Qatar and the United Arab Emirates, which are providing politically vital Arab participation in the coalition against Libyan leader Muammar Gaddafi, would not have joined a NATO-led operation.

Only Italy, which has opened its air bases to the ad hoc coalition operating in Libya and hosts NATO's southern command headquarters, has clearly voiced the wish to bring enforcement of a U.N.-mandated no-fly zone over Libya under NATO orders.

"The problem about getting NATO involved is very simple. Possibly a majority of European member nations are very dubious about this operation," said Jonathan Eyal, director of studies at the Royal United Services Institute in London.

"Germany, Turkey and almost all the new members in ex-communist eastern Europe have doubts about the efficacy of the intervention or don't see why NATO should become involved in North Africa at the risk of sapping its prime mission to defend the continent of Europe," he said.

The absence of NATO, and the United States' visible reluctance to be drawn into a nascent civil war in an Arab state, may have helped France and Britain win acquiescence for last Thursday's very broad U.N. enabling resolution.

Russia and China did not use their Security Council vetoes, but both were quick to criticize the first military actions, perhaps keen to gain points with public opinion and governments in developing nations.

Russia's pre-eminent leader, Prime Minister Vladimir Putin, likened the U.N. mandate for military action to mediaeval calls for crusades, without explaining why Moscow did not stop it.

Russian President Dmitry Medvedev later said the use of the term crusades to refer to the situation in Libya was "unacceptable."

A diplomat familiar with the negotiations said Moscow agreed to dump Gaddafi and abstain in the Security Council after Washington told the Kremlin its support would be seen as a major step toward improving diplomatic and trade relations.

Russia is trying to clear final obstacles, notably from U.S. ally Georgia, to its bid to join the World Trade Organization.

Washington had also put Chechen rebel leader Doku Umarov on its terrorist list and agreed to put him on a U.N. blacklist, the diplomat said.

China's People's Daily, mouthpiece of the ruling Communist party, compared the air strikes on Libya with "the blood-soaked tempests that Iraq has undergone for eight years and the unspeakable suffering of its people."

Moscow and Beijing are strongly attached to the principle of non-interference in the internal affairs of states and both have reason to fear external support for breakaway regions or minorities in the name of humanitarian principles.

Germany has moved fast to make good to Western allies for having broken ranks and abstained on the Libya resolution, offering to step up airborne surveillance in Afghanistan to free other Western radar planes to help enforce the no-fly zone.

But Eyal said it would be politically difficult for Berlin to accept a NATO command over the Libya operation after its foreign minister had publicly criticized the policy.

Turkey's objections are a more complex mixture of public opinion, a quest for a leading role in the Muslim world, strong business interests in Libya and a possible wish to play a mediating role if the conflict turns to stalemate, experts say.

Turkish Prime Minister Tayyip Erdogan, speaking in Mecca, said on Monday Ankara wanted the international military operation against Gaddafi's forces to be ended as soon as possible so Libyans could settle their own future.

"If the Libyan ceasefire halts the advance of Gaddafi's forces, there could be room for a settlement between the two sides," said Hugh Pope, a Turkey expert at the International Crisis Group think-tank.

"Somebody has to be able to talk to Gaddafi, and Erdogan has maintained that channel of communication, which can be helpful."

Italy's motives for wanting NATO involved are easier to understand. Its warplanes have so far participated in the Libya operation under U.S. command, an Italian source said, but could end up under French or Franco-British command if the United States makes good on its stated intention to take a back seat.

That would be a loss of face for a country which in the 1990s provided a platform for NATO air operations in the Bosnia and Kosovo wars in the former Yugoslavia but struggled to gain a political voice at the negotiating table.

However, salving Italian pride is unlikely to be a sufficient reason to put NATO in the driver's seat at the risk of infuriating the Muslim world, complicating the alliance's task in Afghanistan and angering Russia and China.

As a consolation, NATO seems set to be given a role in enforcing a U.N. arms embargo against Libya. Even that may not be without diplomatic complications if the conflict drags on.