"We will not bomb the Libyan public" 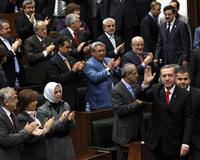 Erdoğan delivered a number of significant messages upon his return from Saudi Arabia where he was awarded an honorary doctorate by Umm Al-Qura University. We will not become a part of the combatant forces…. However we will take on the distribution of humanitarian aid.

Upon his return, Erdoğan discussed the recent developments in Libya and the NATO meeting with journalists on the plane. "I spoke with Gaddafi three times. I very politely asked him to withdraw. However, unfortunately that didn't happen. The Paris Summit was Sarkozy trying to figure out what he could do on his own, no one told him to take on this job."
"Last night the Prime Minister of England called and I asked him, "What is NATO's objective? If NATO is after the underground riches that Libya harbors then as Turkey we cannot be a part of this. If Turkey is considered as being a combatant force, then we will also not be involved. Our planes will not bomb the Libyan public.
Erdoğan reiterated his stance during an AK Party group meeting Tuesday. "The United Nations should be the umbrella for a solely humanitarian operation in Libya," NATO member Turkey's prime minister, Tayyip Erdoğan, said on Tuesday.
In a speech to deputies from his ruling AK Party in parliament Erdoğan said: "Turkey will never ever be a side pointing weapons at the Libyan people."