Japan says high radiation due to partial meltdown after quake 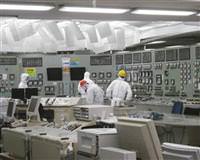 The high level of radiation in water flooding the basement of a reactor at Japan's Fukushima Daiichi nuclear plant is likely due to a partial melting of fuel rods after the March 11 earthquake and tsunami, the government said on Monday.

"The radiation seems to have come from fuel rods that were partially melted down and came in contact with the water used to cool the reactor," Chief Cabinet Secretary Yukio Edano told a news conference. "Steam may have condensed ... carrying water from within the containment vessel."

The partial meltdown would have happened after the tsunami crashed through the reactor and knocked out its cooling system.

His comments suggested there was no crack in the containment vessel in reactor No. 2, as some had feared, and he was not suggesting that there had been a fresh meltdown.

"The airborne radiation is mainly contained within the reactor building. We must make sure this water does not seep out into the soil or out to sea," he said.

Engineers have been battling to control the six-reactor Fukushima complex since the earthquake, which left more than 27,000 people dead or missing across Japan's northeast.

Fires, explosions, and radiation leaks have repeatedly forced them to suspend work on averting a catastrophic meltdown at the plant, which lies 240 km (150 miles) north of Tokyo.

With no clear progress at the facility for days now, the authorities appear to be resigned to a long fight to contain the world's most dangerous atomic crisis in 25 years.

"I think maybe the situation is much more serious than we were led to believe," said one expert, Najmedin Meshkati, of the University of Southern California, adding it may take weeks to stabilize the situation and the United Nations should step in.

"This is far beyond what one nation can handle - it needs to be bumped up to the U.N. Security Council. In my humble opinion, this is more important than the Libya no fly zone."

"Regrettably, we don't have a concrete schedule at the moment to enable us to say in how many months or years (the crisis will be over)," TEPCO vice-president Sakae Muto said in the latest of round-the-clock briefings the company holds.

Radiation at the nuclear plant has soared in recent days, with a reading on Sunday showing contamination 100,000 times normal in water at reactor No. 2.

But radiation levels in the nearby sea, which had soared on Sunday to 1,850 times normal, had come down sharply, Hidehiko Nishiyama, deputy director general of the Nuclear and Industrial Safety Agency, told a news conference on Monday.

Though experts said radiation in the Pacific waters will quickly dissipate, the levels at the site are clearly dangerous, and the 450 or so engineers there have won admiration and sympathy around the world for their bravery and sense of duty.

Last week, two workers at Fukushima were injured with radiation burns to their legs after water seeped over their shoes, and on Sunday engineers had to abandon reactor No. 2 after the new reading.

Beyond the evacuation zone around Fukushima, traces of radiation have turned up in tap water in Tokyo 240 km (150 miles) to the south and even in rainwater samples in Massachusetts.

Japanese officials and international nuclear experts have generally said the levels away from the plant are not dangerous for humans, who anyway face higher radiation doses on a daily basis from natural substances, X-rays or plane flights.

Two of the complex's six reactors are now seen as safe but the other four are volatile, sometimes emitting steam and smoke.

Experts are anxious to find out whether the reactor cores are broken and leaking, as that could lead to a meltdown.

One long-term solution may be to entomb the Fukushima reactors in sand and concrete as happened at Chernobyl, Ukraine, after the 1986 disaster that was the world's worst.

The Japan crisis has prompted a reassessment of nuclear power across the world. It had its most direct political impact yet in foreign politics in Germany at the weekend.

Japanese Prime Minister Naoto Kan has kept a low profile during the crisis, but may face awkward questions after Kyodo news agency said his visit to the region the day after the disaster delayed TEPCO'S response to the unfolding situation.

The nuclear crisis has compounded Japan's agony after the magnitude 9.0 quake and massive tsunami devastated its northeast coast, turning whole towns into apocalyptic-looking landscapes of mud and debris.

Residents there have been repeatedly rattled by aftershocks from the strongest earthquake in Japanese history, including a magnitude 6.5 tremor on Monday that triggered a tsunami warning.

The latest death toll was 10,804 people, with 16,244 still missing 17 days after the disaster. About a quarter of a million people are living in shelters.

A Japanese scientist said if Japan had spent more on infrastructure it could have lessened the tsunami's impact, but

has become too reliant on low-cost measures such as handing out warning maps.

Japan should invoke Western-style urban planning to keep houses and hospitals further from the coast as it rebuilds from the crippling disaster, said Fumihiko Imamura, a professor at Tohoku University's Disaster Control Research Center.

Japan's cash-strapped government has moved away in recent years from costly projects such as increasing the height of sea walls to budget measures like producing maps that show which areas are at lower sea levels, he said.

"We cooperate with the government on tsunami counter-measures, but there has been less financing and sometimes there isn't enough for the construction of structural measures," Imamura said in an interview on Sunday.

"Now, the government's focus has shifted to non-structural measures, because they are cheaper."