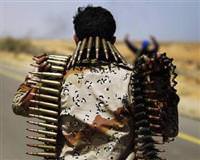 More than 40 governments and international organisations meet on Tuesday to try to lay the groundwork for a Libya without leader Muammar Gaddafi.

As coalition forces pound Gaddafi's tanks and artillery, the London conference will discuss stepping up humanitarian aid to war-torn areas and call for a political process to enable Libyans to choose their own future, British officials say.

British Prime Minister David Cameron and French President Nicolas Sarkozy, who led the drive for a muscular intervention in the Libyan conflict, called on Monday for Gaddafi to go and for his followers to abandon him before it was "too late".

"We call on all Libyans who believe that Gaddafi is leading Libya into a disaster to take the initiative now to organise a transition process," they said in a joint statement.

The London meeting is expected to set up a high-level steering group, including Arab states, to provide political guidance for the international response to the Libya crisis and coordinate long-term support to Libyans.

Agreement on NATO taking full control of military operations over Libya was delayed by Turkish concerns about civilian casualties.

Turkey's Foreign Minister Ahmet Davutoglu told reporters who accompanied him to London that protecting civilians was the first priority, and the lessons of Iraq and Afghanistan should be learned.

Turkey, a large Muslim member of NATO, has said it wants to be part of the political steering group.

He said NATO could pressure Gaddafi into halting attacks on civilians and implementing a ceasefire, after which the Libyan people should be put in a position where they could decide how to reconstruct the political system in their country.

"In Iraq and in Afghanistan we had experience of a military operation without a political objective," he said.

Britain wants the meeting to strengthen the international commitment to enforcing two U.N. resolutions on Libya in the face of criticism from Russia that coalition military strikes have gone beyond what was authorised by the United Nations.

The conference, starting at 1300 GMT and due to end with a news conference at 1630 GMT, may also discuss further sanctions to isolate Gaddafi, a diplomat said.

More than 40 foreign ministers, including U.S. Secretary of State Hillary Clinton and ministers from European, NATO and a number of Arab countries will take part.

U.N. Secretary-General Ban Ki-moon and leaders of the African Union, Organisation of the Islamic Conference and NATO will also attend, as will Qatari Prime Minister Sheikh Hamad bin Jassim al-Thani and a representative of the Arab League.

Russia, not part of the coalition, will not be attending, a British official said.

Italy on Monday proposed a political deal to end the crisis, including a quick ceasefire, exile for Gaddafi and dialogue between rebels and tribal leaders.

Foreign Minister Franco Frattini said he had discussed the proposals with Germany, France and Sweden and expected to talk them through with Turkey before the London meeting.

Frattini's spokesman said Italy hoped the London meeting could express "a united vision" for a post-Gaddafi Libya, including an internationally monitored ceasefire and "an inclusive dialogue between the rebel council, tribal leaders and other players in Libyan society, except Gaddafi".

Britain has invited Mahmoud Jebril, a member of the rebel Libyan National Council, to London although he is not formally invited to the conference, a diplomatic source said.