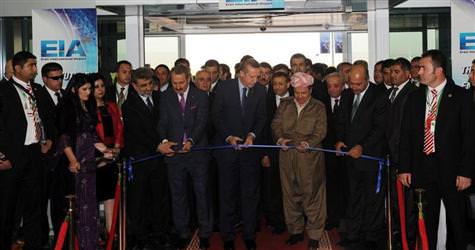 Prime Minister Tayyip Erdogan was welcomed on Tuesday as the first Turkish leader to visit Iraq’s Kurdish region, on a trip laden with significance born of Turkey’s own history of conflict with its Kurdish minority.

Turkish flags were hung from flagpoles in Arbil, the regional capital. Erdogan attended a ceremony to mark the opening of Arbil's new airport, built, like many projects in the booming region, by a Turkish construction firm.
"We have an historic relationship with Iraq and with this beautiful region," he said in a speech at the airport, during which he made reference to his own efforts to heal relations with Turkey's Kurdish minority in its southeast.
"We have started to establish the basis for brotherhood between the peoples of Turkey, which was the basis for economic development," he said. "We have ended the old policy of Turkey which used to deny the humanity of the people."
Turkish foreign policy was long marked by a deep suspicion of Iraq's Kurdish autonomous region set up in the 1990s after the first Gulf War. Turkish troops have operated on its territory against Turkish Kurdish rebels.
Iraqi Kurdish regional President Masoud Barzani praised Erdogan's visit as a historic event.
"Turkey now has a big position in the region and this is because of your wise policies. We hope that these developments will continue after the next Turkish elections in the service of peace and the service of the people of the region," he said.
Thriving trade Turkey has endured decades of separatist conflict with its own Kurdish minority. Erdogan's government, which faces an election in June, has expanded political and cultural rights of Kurds in Turkey in a bid to help end the conflict.

The three provinces that make up Iraq's Kurdish region have near-total autonomy, funded by a share of Iraq's oil exports. They have enjoyed an economic boom as the only parts of Iraq spared the ethnic and sectarian warfare of the last eight years.
Economic ties with Turkey are particularly vibrant, with Turkey seeking to act as a conduit for Iraqi oil and gas and Turkish firms investing in construction and other projects in the Kurdish zone.
Erdogan also attended a ceremony to mark the opening of the first two Turkish banks in Arbil.