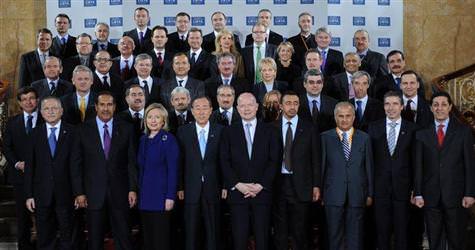 An international coalition piled pressure on Libyan leader Muammar Gaddafi on Tuesday to quit, resolving to continue military action against his forces until he complies with a U.N. resolution to protect civilians.

The United States, Britain and Qatar suggested that Gaddafi and his family could be allowed to go into exile if they took up the offer quickly to end six weeks of bloodshed.

Washington and Paris also raised the possibility of arming the rebels, although both stressed no decision had been taken.

A London conference of 40 governments and international organisations agreed to set up a contact group to coordinate political efforts on Libya's future, which would hold its first meeting in Arab ally Qatar soon.

"We urge Gaddafi and his people to leave and not to pose any more bloodshed," said Qatari Prime Minister Sheikh Hamad bin Jassim al-Thani, adding that the offer of an exit might only be on the table for a few days.

U.S. Secretary of State Hillary Clinton told a final news conference that a political resolution could include Gaddafi leaving the country. A United Nations special envoy would visit Tripoli soon to explore that option and urge the embattled Libyan leader to implement a real ceasefire, she said.

"I'm not sure that we know exactly when we will get to any change in attitude by Gaddafi and those around him," she said. "As you know there is a lot of reaching out that is occurring, a lot of conversations that are going on, and as the Arab League has said it is also obvious to everyone that Gaddafi has lost the legitimacy to lead."

British Foreign Secretary William Hague said that while Britain was not engaged in efforts to find somewhere for Gaddafi to go, others were free to do so.

Rebels fighting Gaddafi promised to build a free, democratic state if they won power in Tripoli.

"All of us must continue to increase the pressure on and deepen the isolation of the Gaddafi regime through other means as well," Clinton said.

"This includes a unified front of political and diplomatic pressure that makes clear to Gaddafi that he must go."

She also said the United States construed a U.N. Security Council resolution adopted this month to allow arming the rebels, although Washington had taken no decision to do so. She said she had discussed ways to extend financial help to the opposition Libyan National Council.

French Foreign Minister Alain Juppe said Paris was ready to discuss arming the rebels with its coalition partners, but he said this was not covered by the U.N. resolution.

Mahmoud Shammam, a spokesman for the rebels in London, told Reuters: "We don't have arms at all otherwise we would finish Gaddafi in a few days ... We are asking for political support more than we are asking for arms, but if we get both that would be great."

On Libya's coastal strip, focus of fighting, Gaddafi's better armed troops appeared to be reversing a recent westward charge by rebels who had taken advantage of coalition air strikes to seize a string of towns over the last week.

Gaddafi accused Western powers of massacres of Libyan civilians in alliance with rebels he said were al Qaeda members.

The final conference statement noted favorably an offer by Qatar to get around U.N. sanctions by selling oil produced in rebel-held parts of Libya to pay for humanitarian needs.

Before the London conference, called to discuss current action against the Tripoli government and a post-Gaddafi era, the interim rebel National Council held out the prospect of a "modern, free and united state" if Gaddafi could be ousted.

Mahmoud Jebril, a leader of the Benghazi-based National Council, was in London for meetings with Cameron and Clinton, although the opposition did not attend the conference.

An eight-point Council statement said the oil-producing north African nation's economy would be used for the benefit of all Libyans. It also said it would draft a national constitution allowing the formation of political parties and trades unions.

Its commitments included guaranteeing "every Libyan citizen, of statutory age, the right to vote in free and fair parliamentary elections and presidential elections, as well as the right to run for office."

Asked about a comment by NATO's supreme commander, U.S. Admiral James Stavridis, that intelligence had shown "flickers" of al Qaeda or Hezbollah presence among the Libyan rebels, Clinton said "We don't know as much as we would like to know and as much as we expect we will know" about the opposition.

With Gaddafi loyalists pushing back against the rebels, Italy, the former colonial power in Libya, put forward a proposal for a political deal featuring a quick ceasefire, exile for Gaddafi and dialogue between rebels and tribal leaders.

"There is a tacit agreement among everybody that the best thing would be for Gaddafi to go into exile, because the reason for continuing the war is the presence of Gaddafi," the Italian source said.

He added that the African Union, which stayed away from Tuesday's meeting to underline its neutrality, was the only body that could persuade Gaddafi to go into exile.

British Foreign Secretary William Hague also implied exile might be a way to take Gaddafi out of the picture and settle the six-week-old uprising against his four-decade rule.

"We want him to leave power and that's what we've consistently said to the Libyan regime. We are not in control, of course, of where he might go," Hague told the BBC, but he said Gaddafi should face the International Criminal Court.

Muslim NATO member Turkey, which initially opposed military action, wants a rapid ceasefire and a negotiated solution. Turkish Foreign Minister Ahmet Davutoglu attended the London conference after Turkey was not invited to the first meeting of the international coalition in Paris 10 days ago.

Some diplomats and analysts have suggested offering Gaddafi immunity from ICC prosecution and safe passage to a host country could be an incentive for him to go quickly.

Britain and France led the push for a muscular intervention in the Libyan conflict and coalition air strikes have helped rebels in the east of the country to advance; but questions remain about the end game in Libya.

The United States has borne the brunt of military strikes so far but President Barack Obama announced on Monday that it would scale down involvement within days as the NATO defense alliance takes over full command of the operation.

Tuesday's meeting, due to end with a news conference at 1630 GMT, is expected to set up a high-level steering group, including Arab states, to provide political guidance for the international response to Libya.