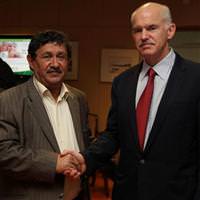 A Libyan government envoy has begun a trip to Europe to discuss an end to fighting, but gave no sign of any major climbdown in a war that has ground to a stalemate between rebels and forces loyal to Muammar Gaddafi.

"It seems that the Libyan authorities are seeking a solution," Foreign Minister Dimitris Droutsas told reporters, adding Obeidi was next due to due travel to Malta and Turkey.

But there was no indication on what Tripoli might be ready to offer -- beyond a willingness to negotiate -- to end a war that has become bogged down on a frontline in the eastern oil town of Brega, while leaving civilians trapped by Gaddafi's forces in the west.

Underlining the plight of civilians in western Libya, a Turkish ship that sailed into the besieged city of Misrata to rescue some 250 wounded had to leave in a hurry after crowds pressed forward on the dockside hoping to escape.

"It's a very hard situation ... We had to leave early," said Turkish consular official Ali Akin after the ship stopped to pick up more wounded in the eastern rebel stronghold Benghazi.

Turkey's foreign minister ordered the ship into Misrata after it spent four days waiting in vain for permission to dock.

The U.N.-mandated military intervention that began on March 19 was meant to protect civilians caught up in fighting between Gaddafi's forces and the rebels.

Neither Gaddafi's troops nor the disorganised rebel force have been able to gain the upper hand on the frontline, despite Western air power in effect aiding the insurgents.

After chasing each other up and down the coast road linking the oil ports of eastern Libya with Gaddafi's tribal heartland further west, they have become bogged down in Brega, a sparsely populated settlement spread over more than 25 km (15 miles).

Yet Western countries, wary of becoming too entangled in another war after campaigns in Afghanistan and Iraq, have ruled out sending ground troops to help the rebels.

The United States, which has handed over command of the operation to NATO, said it had agreed to extend the use of its strike aircraft into Monday because of poor weather last week.

But it has stressed its desire to end its own involvement in combat missions, and shift instead to a support role in areas such as surveillance, electronic warfare and refuelling.

Stephen Dalton, the head of Britain's Royal Air Force (RAF), was quoted as telling Monday's Guardian newspaper that the RAF was planning to continue its operations in Libya for at least six months. He said Britain would need planes "for a number of months rather than a number of days or weeks."

The stalemate on the frontline and the plight of civilians caught in fighting or facing food and fuel shortages has prompted a flurry of diplomatic contacts to find a way out.

Papandreou had been talking by phone with officials in Tripoli as well as the leaders of Qatar, Turkey and Britain over the past two days. Greece has enjoyed good relations with Gaddafi for a number of years.

One diplomat cautioned, however, that any diplomatic compromise -- for example one in which Gaddafi handed over power to one of his sons -- could lead to the partition of Libya.

That was a possibility ruled out by Western countries before the air strikes were launched.

"Various scenarios are being discussed," said the diplomat. "Everyone wants a quick solution."

The rebels, meanwhile, are working to impose discipline among the ranks of their many inexperienced volunteers in order to not only hold their positions but push forward.

If there were eventually to be a ceasefire leading to the partition of Libya, control of revenues from the oil ports, including Brega and Ras Lanuf to the west, would be crucial.

The rebels named a "crisis team" with Gaddafi's former interior minister as their armed forces chief of staff, and attempted to stiffen their enthusiastic but untrained volunteer army by putting professional soldiers at its head.

"We are reorganising our ranks. We have formed our first brigade. It is entirely formed from ex-military defectors and people who've come back from retirement," former air force major Jalid al-Libie told Reuters in Benghazi.

Without a backbone of regular forces, the lightly armed volunteer caravan has spent days dashing back and forth along the coast road on Brega's outskirts, scrambling away in pick-ups when Gaddafi's forces attack with rockets.

In the west, Gaddafi's forces continued to besiege Misrata, shelling a building that had been used to treat wounded, a resident said, killing one person and wounding more.

Misrata, Libya's third city, rose up with other towns against Gaddafi's rule in mid-February, but it is now surrounded by government troops after a violent crackdown put an end to most protests elsewhere in the west of the country.

"It is very, very bad. In my street, Gaddafi bombed us," said Ibrahim al-Aradi, 26, one of the evacuees on board the Turkish ship that brought the wounded from Misrata.

"We have no water, no electricity. We don't have medicine. There are snipers everywhere," he told Reuters.

After weeks of shelling and encirclement, Gaddafi's forces appear to be gradually loosening the rebels' hold on Misrata. Rebels say they still control the city center and the port, but government troops are pressing in.

Accounts from Misrata cannot be independently verified because Libyan authorities are not allowing journalists to report freely from the city, 200 km (130 miles) east of Tripoli.