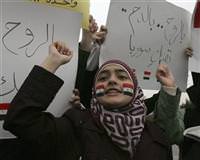 Thousands of Syrians called for freedom at the funeral of eight protesters on Sunday, a witness said, after President Bashar al-Assad named a former agriculture minister to form a new government.

"Freedom, freedom, freedom. One, one, one. The Syrian people are one," mourners chanted as they carried the bodies of eight people draped in Syrian flags through the streets of Douma, a suburb of the capital Damascus.

Witnesses said on Friday that security forces opened fire on protesters in Douma, which has become a gathering point for people descending on Damascus from outlying provinces. Syria has blamed the violence in Douma and other cities on "armed groups."

The protests, inspired by Arab uprisings which have toppled leaders in Egypt and Tunisia, pose the biggest threat to Assad's 11-year rule in Syria, which has been governed by emergency law and one-party rule since 1963.

Before the protests Assad had succeeded in eroding years of Western isolation while maintaining an anti-Israel alliance with Iran, hosting militant groups Hamas and Hezbollah, and holding intermittent and indirect peace talks with Israel.

Activists and witnesses say more than 60 people have been killed in two weeks of protests in Syria. Statements by authorities suggest a toll nearer 30.

On Sunday, Assad named Adel Safar, agriculture minister in the government which resigned last week, to form a new cabinet.

Under his watch at the agriculture ministry, a water crisis that experts largely attribute to corruption and mismanagement, intensified and led to the displacement of hundreds of thousands of people. Syria became a net grain importer.

Safar's government will replace the outgoing cabinet of Naji al-Otari, whose resignation Assad accepted on Tuesday. Two days later the president made a series of limited reform pledges, including setting up studies into replacing emergency law with anti-terrorism legislation, and addressing Kurdish grievances.

Ministers have little influence in Syria, where power is held by Assad, his family and the security apparatus.

Safar will have no say in how authorities react to protests which have intensified in Douma, where rights activists said security forces fired on Friday at protesters demanding political freedoms and an end to graft.

Some 50 wounded arrived in secret police cars around midnight in Municipality Square, a witness said.

Secret police agents gave the names of 25 people in hospital with serious injuries, a witness in Douma said, adding that the authorities had promised to deliver the bodies to their families before noon prayers.

"Society figures made it clear to the authorities that Douma wants its dead. We are expecting 15," one resident said.

Friday's protest in Douma was one of several across the country. Thousands took to the streets in major cities after Friday prayers, defying the security forces who fired teargas and live ammunition and used batons to try to disperse protesters who have dismissed reform gestures by Assad.

"Douma is boiling. Syria as a nation may no longer keep sitting idly and let a historic chance for freedom pass by," one of the activists said of the area some 15 km (10 miles) north of the city, which links the countryside north of Damascus to the capital.

In Deraa, where protests started before they spread to Damascus, the coast and areas in between, security forces dispersed a sit-in on Saturday at Serail Square and arrested at least 20 people, witnesses said.

"Our demands are same, same: freedom, freedom," the protesters, who numbered 200 to 300, chanted.

More than 2,000 ethnic Kurds took to the streets of the northeastern city of Qamishli on Friday, despite a promise by Assad to look into granting citizenship to Kurds who are in Syria without Syrian passports, Kurdish sources said.

"Our demands are freedom, not just citizenship," chanted the protesters, who were not confronted by security forces.

Syria's second city Aleppo has been protest free, despite being inhabited mostly by Sunni Muslims who generally dislike the fact that the minority Alawite ruling elite have been amassing wealth and power widely seen as unchecked.

The turmoil could have wider repercussions since Syria, bordered by Lebanon, Israel, Turkey, Jordan and Iraq, is in the thick of the Middle East conflict.

Hamas lent its support to Syria's ruling hierarchy and said the unprecedented protests against Assad's rule must not compromise Syria "rejectionist" stand against Israel.

There had been doubts whether Hamas, which has built a reputation as a liberation movement among Palestinian constituents, would back Syrian authorities against protesters.

The United States, which has designated Syria as a "state sponsor of terrorism" since 1979, and the United Nations, condemned the latest escalation in violence.

Commenting on the protests last week, Assad played down the possibility of any fundamental transformation to Syria's autocratic political system, which he has kept intact since succeeding his late father, President Hafez al-Assad, in 2000.