Ankara sends a message to Gaddafi 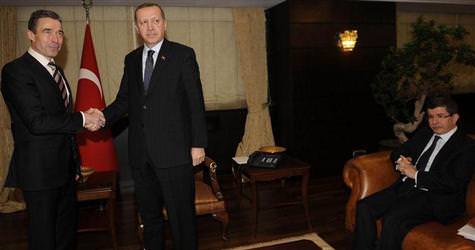 Ankara hosted both NATO Secretary General Anders Fogh Rasmussen and Libya’s Deputy Foreign Minister Obeidi yesterday. A message was delivered to Gaddafi that, ‘It is now more difficult to compromise on a name. You have to go.”

Foreign Affairs Minister Ahmet Davutoğlu stated that in order for Libya to normalize, NATO needs to come into effect. While NATO Secretary General Anders Fogh Rasmussen was unable to comment publicly upon his departure from Ankara following yesterday's four-hour visit, Davutoğlu went in front of the cameras to deliver a message to both NATO and Libya; "NATO must work for normalization in Libya." Expressing that during the meetings with Rasmussen, the issues of NATO's missile defense system and a new command center were discussed; Davutoğlu announced that he also relayed Turkey's efforts to extend humanitarian aid to the region and especially to Misrata and Benghazi.
Emphasizing that the NATO operation in Libya should not last long as it did in Afghanistan, Davutoğlu expressed that NATO has a very important role to play in preventing civilian losses and in order to establish a ceasefire as soon as possible.
CONTINUING TO HELP
Davutoğlu also announced that the Council of Ministers was briefed regarding the Misrata Operation and stated that the Ankara ship carrying 475 passengers including 250 wounded from Misrata and almost 100 wounded from Benghazi is expected to reach Izmir by Wednesday morning.
Davutoğlu went on to state, "From here on out, wherever help is needed we will continue to help. Today medicine and aid is being sent in two C-130 cargo planes. This is to ensure those who are wounded and were unable to come here still receive treatment."
Libya's Deputy Foreign Affairs Minister Abdelati Obeidi, who was accepted in Greece by President Papandreu, received a 'cold' reception in Turkey. Meeting only with the Foreign Ministry, Davutoğlu did not even take a photograph with Obeidi. Davutoğlu responded to Obeidi's message that war is not a solution, by stating that "it is too late to find a person that will allow for both sides to compromise. Gaddafi must go."
Foreign Affairs Minister Davutoğlu stated in an announcement following his meeting with Rasmussen, "We have kept our embassy in Trablus and our consulate in Benghazi open, ever since the very beginning of the crisis and we will continue to do so. Every corner of Libya is holy for us. We will continue to exert efforts to ensure attacks on civilians come to an end."
Davutoğlu went on to inform that he made contact with Libya's National Council yesterday and stated; "We will do all that we can to ensure that the suffering is halted as soon as possible and that the Libyan public is granted a road map to ensure the political change they demand."