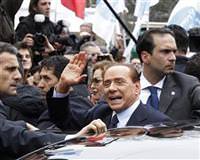 First, as judges will hear when Berlusconi faces trial on Wednesday, came dinner; a meal often composed of foods in the red, white and green of Italy's tricolor flag.

Finally, at the end of the evening, 74-year-old Berlusconi would choose "one or more women with whom he spent the night in an intimate relationship," in exchange for money, expensive gifts or rent-free apartments.

The scandal has eaten away at the popularity of the media billionaire and cast a shadow on a political system dogged by corruption scandals throughout the post-war era. But he is in little danger of being forced from office before a verdict which may take years or may never come.

Prosecution documents list the names of 33 young women, mostly would-be starlets hoping to break into showbusiness on one of Berlusconi's television channels, who prosecutors say were paid to have sex with him.

For Berlusconi, who will not be present when the trial opens, only one of them matters.

She is Karima El Mahroug, a Moroccan nightclub dancer known by the stage name of Ruby "Rubacuori" ("Heartstealer). She was 17 when, according to the prosecutors, she was paid to have sex with him. Paying for sex with a woman under 18 is a crime in Italy.

In the trial, Berlusconi is also accused of abuse of office, by intervening to have El Mahroug released from a Milan police station last May as a cover-up, after she was accused of stealing a 3,000-euro bracelet.

Even Berlusconi's lawyers acknowledge that he personally phoned police officers and told them he believed El Mahroug to be the niece of former Egyptian president Hosni Mubarak, although they say he did not exert improper influence.

Berlusconi denies all charges. He says he likes women and is "no saint" but has never paid for sex. Parties at his villa in Arcore, a small town outside Milan, are normal, "convivial" dinners with lots of food, laughter and jokes.

The gifts and money he gave to some of the women, he says, were just his own, generous, way of helping people in need and well within his means as one of Italy's richest men.

He accuses leftist magistrates of waging a political, moralistic campaign to oust him from power and has frequently decried the wiretaps used on the phones of his guests.

Wiretaps have played a major role in the investigation, and for months transfixed Italians have been treated to a daily diet of steamy transcripts of phone conversations