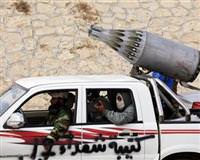 Like many cities, Misrata rejected Gaddafi's rule in a revolt in February. In a violent crackdown, Gaddafi forces retook most of western Libya, leaving Misrata cut off and surrounded, with dwindling supplies.

"There was fighting on three fronts today, the port in the east, the centre around Tripoli street and the west of the city. Mortars, tank fire, and artillery were used to shell those areas," the rebel called Abdelsalam said by telephone. "Medical sources told me one person was killed and five were injured."

As he spoke, an explosion could be heard in the background.

"We heard several explosions and rebels I spoke with said there were air strikes. They could see huge plumes of smoke in west Misrata near the beach, an area called Zrek," he said, adding the area is used by Gaddafi forces to shell the port.

"But we cannot say what the exact targets were."

He said NATO strikes had previously hit brigades in south Misrata. "We don't know how effective the air strikes were but we don't feel any difference, the situation is still the same."

"NATO needs to either launch a serious operation to take out all the heavy armoured vehicles, including tanks. Destroying a tank here and there doesn't help. If they don't want to do this, they should provide us with weapons to do it ourselves."

The rebels are angered by what they perceive to be a scaling back of air strikes since NATO took over, following an early onslaught led by the United States, France and Britain that at once stage tilted the war in the rebels favour.

"I ask the international community, which is still confused and reluctant to bomb his (Gaddafi) forces properly: isn't he the main threat to civilians?" a rebel spokesman called Gemal told Reuters. "They should do more."

Libyan officials deny attacking civilians in Misrata, saying they are fighting armed gangs linked to al Qaeda. Accounts from Misrata cannot be independently verified as Libyan authorities are not allowing journalists to report freely from there.

The rebels say they are fighting for an end to decades of oppression under one of the world's longest serving leaders and have no Islamist militant agenda. They deny al Qaeda links.

"They say they don't know who we are and we could be al Qaeda. When we hear this, we honestly don't know what they are talking about," Abdelsalam said.

"We are doctors, lawyers, engineers, normal Libyan people. We had no choice but to take up arms."

Neighbouring Algeria has said AQIM -- al Qaeda's North African wing -- was noticeably ramping up its presence in Libya and that a prolonged conflict across its desert frontier risked destabilising the Sahel region further.

"People are panicking, especially women, children and old people. Most people left their homes for safer areas and found refuge with other families," Abdelsalam said.

"No fruit and vegetables have been available in Misrata for over 25 days, bread is also difficult to find. People are scared to go out because of the snipers and the indiscriminate shelling. The upper-hand is still with Gaddafi's forces."

In Zintan, a rebel spokesman said government forces, who have remained on the outskirts of the city, had also launched attacks. "Gaddafi's forces shelled the north of the city from 3 a.m. today until 8.30 a.m.," said spokesman Abdulrahman.

He said the last NATO strike around Zintan, southwest of Tripoli, was on Friday. "They hit a radar. They know where Gaddafi's army is positioned. Why don't they hit them?"