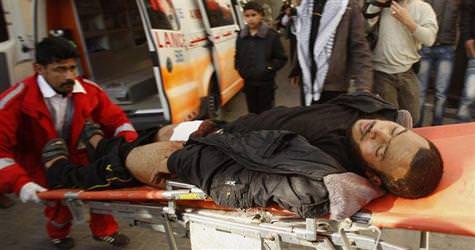 The Israeli airstrike on Gaza, which has killed seven people in 24 hours, continues.

One of the leaders of Hamas, Ahmet al Kurd, the Palestinian Minister of Labor and Social Services for the Palestinian government in Gaza share details of the events transpiring with sabah.com.tr. "A ceasefire was announced, however Israel is not is not paying heed, the bombardment continues."
What is the latest situation in Gaza?
A ceasefire was announced last night at 23:00, however Israel continued bombing. Later, in the early morning hours at three a.m. another ceasefire was announced; yet this morning Israeli warplanes bombed Gaza once again.
How many Palestinians have been killed?
Yesterday there were five killed, and this morning two more were killed, bringing the total death toll up to seven. We also have 40 wounded, and most of those killed and injured were civilians.
Israel claims the reason behind the bombing is a Hamas attack on a bus. Is this true?
Israel has been attacking Gaza for the past four days. Three days after the attacks started, we retaliated. No matter what country, if faced with such attacks, they would have done the same. We defended ourselves, however they responded by bombing even more.
Is this expected to be a massacre of the scope that occurred in 2009?
Israel is already an aggressive country, they have no timeline. They can attack at any time. They already shoot missiles and open fire at us. They have even hit an ambulance carrying our wounded. I don't know if it will become a massacre similar to what occurred in 2009 and they don't need to conduct such a large-scale operation. As I said before, they are already constantly staging attacks.
Do you have a message on behalf of Hamas?
I speak to all Muslims and the Islamic world, including Turkey. They should not remain silent on the Gaza issue. Turkey has always offered us support on this matter; hopefully other Arab countries will stand up for us, as Turkey has done. As I said before, these attacks were not initiated by missiles we shot. Israel had already been attacking us for four days. We sent a rocket in retaliation in order to defend ourselves.