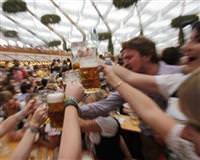 Almost 10 percent of all cancers in men and 3.0 percent in women in western Europe are caused by people drinking too much alcohol, scientists said on Friday.

German researchers analyzed data from France, Italy, Spain, Britain, The Netherlands, Greece, Germany and Denmark and found 50,400 out of a total of 79,100 cases of certain types of cancers -- in including bowel and throat tumors -- in 2008 were caused by people drinking more than recommended limits.

"Many cancer cases could have been avoided if alcohol consumption was limited to two alcoholic drinks per day in men and one alcoholic drink per day in women, ... the recommendations of many health organizations," said Madlen Schutze of the German Institute of Human Nutrition, who led the study.

"And even more cancer cases would be prevented if people reduced their alcohol intake to below recommended guidelines or stopped drinking alcohol at all."

A standard drink contains about 12 grams of alcohol and is equivalent to one 125 milliliter (ml) glass of wine or a half pint of beer.

She noted that in Britain, mouth cancer has become much more common in the last 10 years, and "one reason for this could be because of higher levels of drinking, as this study reflects."

According to the International Agency for Research on Cancer (IARC), part of the World Health Organization, there is a causal link between alcohol consumption and liver cancer, breast cancer colon or bowel cancer, and cancers of the upper digestive tract such as mouth, throat and oesophageal cancers.

STICK TO THE LIMITS

The researchers, whose work was published in the British Medical Journal, used data from research known as the European Prospective Investigation into Cancer (EPIC) study in which 363,988 men and women, mostly aged between 35 and 70 when they joined the study, were followed for cancer from the mid-1990s.

They calculated that in 2008, alcohol consumption by men was responsible for about 57,600 cases of cancer of the types known to be linked to drinking. More than half of the cases, or 33,000, were due to having more than two drinks a day.

Alcohol intake by women in the eight countries caused about 21,500 cases of upper digestive tract, liver, colorectum, and breast cancer, of which more than 80 percent, or 17,400, were due to their having more than one standard drink a day.

Manuela Bergmann, who worked with Schutze on the study, said the findings provided solid support for recommended drinking limits and said she hoped more people would stick to them.

"It underlines that at the very least, it would be good to stay within the limits," she said in a telephone interview.

"Many people believe it's only a small group who drink more than the upper limits, but it's becoming more of a problem because alcohol is cheap and available, so people drink more."

Estimates from the American Institute for Cancer Research and the World Cancer Research Fund published in February said a third of all common cancers in the United States, China and Britain could be prevented each year if people had healthier diets, drank less alcohol and exercised more.