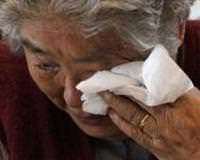 Japan expanded the evacuation zone around a crippled nuclear plant on Monday because of high levels of accumulated radiation, as a strong aftershock rattled the area one month after a quake and tsunami sparked the worst nuclear crisis since Chernobyl.

The operator of the crisis-hit Fukushima Daiichi nuclear complex said it had stopped releasing low-level radioactive water into the sea, completing the controlled discharges that sparked concerns about contamination in neighboring China and South Korea.

Tokyo Electric Power Co, TEPCO, said 10,400 tonnes of low-level radioactive water, left by the tsunami, had been pumped back into the sea in order to free up storage capacity for highly contaminated water from the reactors.

A magnitude 6.6 tremor shook buildings in Tokyo and a wide swathe of eastern Japan on Monday evening, killing one man, knocking out power to 220,000 households and causing a brief halt to water pumping to cool three damaged nuclear reactors.

The epicenter of quake, which was followed by more than 25 aftershocks on Monday, was 88 km (56 miles) east of the Fukushima Daiichi nuclear complex at the center of the crisis.

The biggest tremor forced engineers to postpone plans to remove highly contaminated water from one reactor, but nuclear safety officials said work had resumed by nightfall.

The government announced earlier that because of accumulated radiation contamination, it would encourage people to leave certain areas beyond its 20 km (12 mile) exclusion zone around the plant.

"These new evacuation plans are meant to ensure safety against risks of living there for half a year or one year," he said. There was no need to evacuate immediately, he added.

The move comes amid international concern over radiation spreading from the six damaged reactors at Fukushima, which engineers are still struggling to bring under control after they were wrecked by the 15-meter tsunami on March 11.

TEPCO President Masataka Shimizu visited the area on Monday for the first time the disaster. He had all but vanished from public view apart from a brief apology shortly after the crisis began and has spent some of the time since in hospital.

"I would like to deeply apologize again for causing physical and psychological hardships to people of Fukushima prefecture and near the nuclear plant," said a grim-faced Shimizu.

Dressed in a blue work jacket, he bowed his head for a moment of silence with other TEPCO officials at 2:46 p.m. (0546 GMT), exactly a calendar month after the earthquake hit.

Fukushima Governor Yuhei Sato refused to meet him, but the TEPCO boss left a business card at the government office.

Engineers at the plant north of Tokyo said they were no closer to restoring the plant's cooling system, which is critical to bring down the temperature of overheated fuel rods and to bringing the six reactors under control.

In a desperate move to cool the highly radioactive fuel rods, operator Tokyo Electric Power Co (TEPCO) has pumped water onto reactors, some of which have experienced partial meltdown.

But the strategy has hindered moves to restore the plant's internal cooling system as engineers have had to focus on how to store 60,000 tonnes of contaminated water.

Engineers are also pumping nitrogen into reactors to counter a build-up of hydrogen and prevent another explosion sending more radiation into the air, but they say the risk of such a dramatic event has lowered significantly since March 11.

The triple disaster is the worst to hit Japan since World War Two, leaving nearly 28,000 dead or missing and rocking the world's third-largest economy.

Concern at the government's struggle to handle the situation is mounting, with Prime Minister Naoto Kan's ruling party suffering embarrassing losses in local elections on Sunday.

Voters vented their anger at the government's handling of the nuclear and humanitarian crisis, with Kan's ruling Democratic Party of Japan losing nearly 70 seats in local election.

There is talk of forming a grand coalition of mainstream parties to tackle the massive task of recovery from the disaster. But the leader of one potential coalition partner said Sunday's polls made Kan's party unattractive.

"The people are saying the government has been handling the disaster badly. Joining hands with such a party ... is not what the people are hoping for," New Komeito head Natsuo Yamaguchi told Reuters in an interview.

The unpopular Kan was already under pressure to step down before March 11, but analysts say he is unlikely to be forced out during the crisis, set to drag on for months.

"The great disaster was a double tragedy for Japan. The first tragedy was the catastrophe caused by the earthquake, tsunami and the nuclear accident. The other misfortune was that the disaster resulted in prolonging Prime Minister Kan's time in office," Sankei newspaper said in an editorial on Monday.