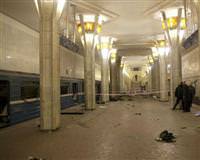 President Alexander Lukashenko said that a blast that tore through a crowded metro station in the Belarus capital Minsk in evening rush hour killing 11 people was an attempt to destabilize the country.

As police placed the capital on high alert, Lukashenko, the autocratic leader who has led the ex-Soviet country since 1994, linked the explosion to a previous unsolved blast in 2008, saying: "These are perhaps links in a single chain."

Acts of deliberate violence are unusual in Belarus, a tightly policed ex-Soviet republic of 10 million people which shares borders with EU members Poland, Latvia and Lithuania and with Russia and Ukraine.

"We must find out who gained by undermining peace and stability in the country, who stands behind this," said the president, whose re-election for a fourth term and subsequent crackdown on protests was criticized by Western nations.

One opposition figure said he feared Lukashenko would use the blast to crack down even more harshly on political rivals.

"Prosecutors qualify this as a terrorist act," a source in Lukashenko's administration told Reuters.

Lukashenko, who is at odds with Western governments over a police crackdown on an opposition rally against his re-election last December, said: "I do not rule out that this (the blast) was a gift from abroad."

A former state-farm boss, Lukashenko has ruled Belarus with an iron fist, jailing opponents and muzzling independent media while offering generous welfare and pensions to his citizens on the back of Russian subsidies.

After the election, police arrested nearly 700 protesters and reporters during protests, dispersed violently by police.

The European Union and the United States have imposed a travel ban on Lukashenko and his closest associates because of the December 19 crackdown. He has said the opposition rally was an attempted coup financed by the West.

The Organization for Security and Cooperation in Europe monitors said the vote count was flawed and criticized police for being heavy-handed. The remarks angered Minsk, which forced the OSCE to close down its office there.

In typical combative style, Lukashenko hit back, defending the police, dismissing members of the opposition as being bent on "banditry" and denouncing the OSCE verdict as "amoral."

Monday's blast occurred on a platform at around 6 p.m. at the Oktyabrskaya metro station -- one of the city's busiest underground rail junctions -- about 100 m (yards) from the main presidential headquarters.

Lukashenko was quoted by Interfax news agency as saying 11 people had been killed and 100 injured. A presidential administration source later said 126 people had been injured.

In his remarks, Lukashenko referred back to July 2008 when a home-made bomb wounded about 50 people at an open air concert he was attending. The crime was never solved.

"Regardless of who organized and ordered the blast, the government will be tempted to use it as an excuse to tighten the screws ... I am afraid they will use it," said Anatoly Lebedko, leader of the opposition United Civic Party.