Death toll at 43 as tornadoes and storms rake South 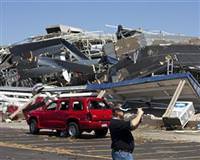 Three days of severe storms and tornadoes in the southern United States have killed at least 43 people while downing power lines and wrecking hundreds of buildings, officials said on Sunday.

North Carolina accounted for the bulk of casualties and property losses, with 22 people killed and about 130 others injured. Significant damage was reported in at least 26 counties and power outages affected more than 200,000 people.

"Despite all the damage, the thing we heard the most today was how grateful people are to be alive," North Carolina governor Beverly Perdue told reporters after touring storm-damaged areas on Sunday.

She spoke with President Obama, who pledged "whatever it takes to rebuild North Carolina," Perdue said.

In Virginia, there were four confirmed deaths and reports of three unconfirmed deaths, according to the Office of the Chief Medical Examiner. Virginia emergency officials said that 177 structures had been damaged by the severe weather.

It appeared to be the deadliest U.S. storm since February 2008, when 57 people died in two days from tornadoes in the South and Ohio Valley, said AccuWeather.com meteorologist Andy Mussoline, who said the death toll may change.

Dominion Virginia Power said the two nuclear reactors at its Surry Power Station in southeastern Virginia shut down automatically on Saturday when an apparent tornado touched down and cut off an electrical feed to the station.

Backup generators operated normally and both units "are in safe and stable condition," the utility said in a statement.

Nuclear Regulatory Commission spokesman Roger Hannah said on Sunday no radiation was released during the storm and shutdown. "Everything worked the way it should," he said.

A SWATHE FROM OKLAHOMA TO THE ATLANTIC

The storms began in Oklahoma on Thursday, then moved through the South and hit the East Coast by Saturday. There were 241 tornadoes reported, with 50 confirmed.

Seven people died as a result of the storms in Alabama, seven died in Arkansas and one died in Mississippi. Two people were killed in Oklahoma when a tornado flattened buildings.

Governors in North Carolina and Virginia declared a state of emergency as authorities scrambled with rescue and cleanup operations.

Bertie County, a sprawling, rural area in northeastern North Carolina, was the hardest hit. Eleven residents died and 50 others were taken to hospitals, officials said on Sunday.

"The thing about this storm that is different than a typical tornado was the width," Lamb said. "It wasn't just 100 or 200 yards wide, but a half-mile wide and it stayed on the ground for six miles or so."

There were tales of survival.

"One couple went into a room for no particular reason. It's just where they decided to camp out. And every room in the house was destroyed except for that room," Lamb said.

In Sanford, North Carolina, a Lowe's and Wal-Mart were destroyed, as was a middle school in Greene County along with half the school buses parked nearby. In Raleigh, Shaw University and other buildings absorbed significant damage.

Progress Energy, the main utility in eastern North Carolina, said 220,000 customers were without electricity at the peak of the storm, with 78,000 homes and utilities still without power on Sunday morning.

The storm snapped hundreds of power poles and 30 transmission structures were damaged, company spokesman Mike Hughes said. In some areas, tornadoes swept away poles and wires and dropped them elsewhere.

"There are some parts where a tornado took the utility structure away and we cannot find it," Hughes said.

The stormy weather let up on Sunday, but Mussoline said more tornadoes could threaten the southern plains and Ohio Valley in the coming week, notably on Tuesday.

"At this point, it looks like the southeast will be spared the worst this upcoming week," he said.