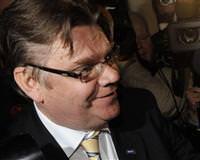 Finnish voters threw sand in the gears of European Union plans to bail out Portugal by thrusting the anti-euro True Finns party into a crucial role in parliament and possibly into government.

Finland's parliament, unlike others in the euro zone, has the right to vote on EU requests for bailout funds, meaning it could hold up costly plans to shore up Portugal and bring stability to debt markets.

The strong showing for the populist True Finns -- in close third place -- reflects growing public frustration in some EU states about footing the bill for weaker economies such as Greece, Ireland and Portugal.

The centre-right National Coalition narrowly won with 20.4 percent of the final vote but the True Finns made the biggest election gains of any party.

The party got 19.0 percent compared to 4.1 percent in 2007, which means it is likely to be involved in talks on forming a government.

The charismatic True Finns leader Timo Soini said he wanted to change the terms of the bailout for Portugal.

"The package that is there. I do not believe it will remain," Soini said on public broadcaster YLE, referring to the rescue package being worked on for Portugal, the third euro zone country to need a financial rescue after Greece and Ireland.

The opposition Social Democratic Party, which supports the EU but is critical of current plans to aid Portugal, won 19.1 percent and also is likely to join government talks.

Prime Minister Mari Kiviniemi's Centre Party, hit by a political funding scandal in recent years, suffered the biggest setback, dropping to just 15.8 percent of the vote from 23.1 percent in 2007. She said it would go into opposition.

Anxiety over unemployment and pension cutbacks also boosted support for the True Finns, who have a conservative social agenda but lean to the left on social welfare.

Finland's recent rebound from the global financial crisis has done little to boost the number of jobs. Its flagship company, Nokia (NOK1V.HE), is struggling to compete with Apple Inc (AAPL.O) and Asian handset makers, and is expected to cut jobs soon.

Some Finns expressed concern the True Finns' rise could turn the country off its course as the sole Nordic country to adopt the euro, with a place at Europe's main decision-making table.

"Finnish people have always been very open, I wonder why we are now pulling off, closing up again," said one young woman voter, who gave her name as Eevi.

The True Finns leader told Reuters his aim was for Finland to "pay less to Brussels". "It is a bad deal," he said of the Portugal plan.

Soini said the party would at least "get an invitation to talks" on a new government, which is expected to be formed in mid-to-late May.

Analysts anticipate that the talks, in which the pro-EU National Coalition will seek to form a bloc with a majority in the 200-seat parliament, will be difficult.

That task will be led by the party's 39-year-old leader Jyrki Katainen, the finance minister of the outgoing coalition who is likely to be appointed the next prime minister.

Analysts have said he could demand that potential allies agree to the bailout, although the party's narrow margin of victory puts him in a tough negotiating position.

Analysts forecast the next government will have to heed voter discontent, which could mean a harder line against Brussels even if it can persuade the True Finns to let the bailout pass.

But Katainen played down the idea that Finland would now join the euro zone's awkward squad.

"Finland has always been a responsible problem solver, not causing problems. This is about a common European cause," he said. "After the elections, the biggest parties will begin to look for common ground."

He finished the night celebrating his party's victory with foreign minister Alexander Stubb, another pro-European National Coalition member. The two checked the election results on an iPad.