Japan nuclear crisis could drag on way past timetable 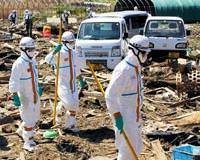 Japan's Tokyo Electric Power Co faces big hurdles to hitting its goal of safely shutting down its crippled nuclear reactors in six to nine months and the crisis -- including radiation leaks into the sea and air.

A list of the things that could go wrong shows that the operation could take longer -- or be derailed altogether if unknown factors are considered, like another powerful quake.

Even the government was quick on Monday to lower expectations. Chief Cabinet Secretary Yukio Edano told a news conference that the time frame could be achieved if "everything goes smoothly."

TEPCO has been struggling to stabilize its Fukushima nuclear power plant 240 km (150 miles) north of Tokyo, that was seriously damaged by the March 11 earthquake and tsunami and has been leaking radiation ever since.

The difficulties, including the dumping of contaminated water into the ocean, have sparked an outcry in South Korea and expressions of concern from China. Tokyo offered apologies for a failure to give sufficient warning and explanation.

In announcing its plan on Sunday, TEPCO listed eight risk factors that could get in the way, including hydrogen explosions and power outages.

TEPCO's plan calls for continued injection of water into the reactors and spent pool fuels, while workers remove contaminated water so that they can access the reactors' cooling systems.

Workers will simultaneously build an external cooling system while preparing for "water entombment," a last-ditch step in which containment vessels are flooded with water.

But each step and contingency plan listed by TEPCO not only faces formidable obstacles but also entails new risks.

"Japan may very well have to weigh speed against the health of the workers on site and the amount of radiation that it lets out," said Osaka University Professor Kenji Sumita.

Reactors No.1, No.2 and No.3 at the complex are all flooded with dangerous water. No one can get near enough to the reactors to find where that water is coming from.

Tepco has spent over a month on its Plan A, injecting water into the three reactors while also moving some of the contaminated water flooding the turbine building in reactor No.2 into condensers to gain access to essential cooling pumps.

But coolant levels are not rising as much as would be expected inside the reactors, while the contaminated water levels refuse to go down, suggesting leaks.

Some specialists also worry about possible damage to the fuel rods in the No. 4 reactor's spent fuel pool.

"On paper, the plan looks do-able, given the known risks," said Kazuhiko Kudo, a professor at Kyushu University who specializes in nuclear engineering.

"But there are many unknowns, including the risk of further earthquakes. And we are talking about people working in highly contaminated areas. It's not going to be easy."

It was difficult, Kudo said, to predict how technical setbacks might affect the proposed timetable.

"A month here, a month there," he said. "If another disaster hits, you could easily see a couple of months in which all work stalls."

The biggest challenge is bringing under control reactor No.2, flooded with the most highly contaminated water. Its nuclear pressure vessel and containment structure are likely to have been damaged.

The big pre-requisite for water entombment is that the containment vessels are sound and that workers find and stop all leaks. "Otherwise, you'll only be creating massive amounts of contaminated water," said Kudo.

In the meantime, radiation seeps out. And the longer the current uncertainties persist, the more contaminated water Tepco creates through its stopgap cooling measures.

Tepco earlier this month dumped 10,393 tons of water with "low levels of contamination" into the ocean, to make room for storing water with higher levels of radiation.

And while TEPCO has worked to stop the main leaks into the ocean, it has not yet turned its attention to leaks into the water table, some experts said.

Once radiation levels are low enough for workers to gain more access to the reactor buildings, TEPCO plans to cover the reactors and spread the grounds with inhibitors to absorb radioactive particles.

"This is the first time that TEPCO has come out clearly and presented their plan and some contingencies, so I have hopes that this will work," said Takashi Sawada, vice chairman at the Atomic Energy Society of Japan. "But I also have doubts."