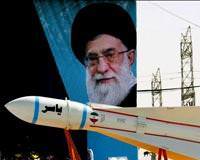 "Heydar Moslehi will continue his work as the intelligence minister after the supreme leader rejected his resignation," the ISNA student news agency reported, giving no further details.

The official IRNA news agency reported earlier Moslehi's resignation had been accepted by President Mahmoud Ahmadinejad. The semi-official Fars news agency also quoted an unnamed source as saying the minister had been sacked.

Under Iran's system of 'velayat-e faqih', or rule by religious legal scholar, the supreme leader should remain above the political fray of day-to-day politics.

Analysts say Khamenei's move to reinstate Moslehi displays the leader's determination to have the last say on key positions. The appointment of key ministers for posts such as intelligence, defense and foreign affairs traditionally should be approved by the supreme leader.

Khamenei shares Ahmadinejad's stance on the nuclear row with the West, which fears Iran's nuclear work is a cover to build bombs. Tehran denies it.

But analysts say despite his support to the hardline president, Khamenei has never let any group, even among the conservative camp, gain enough power to challenge his authority'

"It is a serious blow to Ahmadinejad ... The rejection shows who is the boss in Iran," said a political analyst, who asked to be unnamed.

Earlier this month, Ahmadinejad demoted a controversial aide Esfandiar Rahim Mashaie, whose unorthodox views about the role of powerful clergy and the importance of Iranian cultural values over Islam outraged hardliners in the establishment.

Moslehi, a mid-ranking cleric, was criticised by parliamentarians in 2009 for lacking the experience necessary when proposed by Ahmadinejad for the position.

Ahmadinejad crushed the street protests that greeted his disputed win in 2009 but the vote has created a deepening rift among the ruling hardliners, who resent his rising economic and political power.

The opposition says the vote was rigged. Authorities deny the claim.