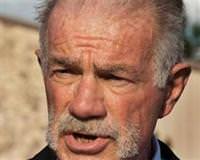 A Detroit prosecutor has filed a petition in district court to stop a Florida fundamentalist Christian preacher, who recently caused riots in Afghanistan after he burned a Koran, from holding a rally outside a large Michigan mosque.

Wayne County Prosecutor Kym Worthy said the threat of violence was too great to allow Terry Jones to hold the planned gathering on Friday near the Islamic Center of America -- the largest U.S. mosque -- in the heavily Muslim Detroit suburb of Dearborn.

A hearing on Worthy's bid to block Jones and his supporters from holding the rally at the mosque will be held on Thursday in a Dearborn court. The petition is dated April 15.

Jones, in a telephone interview with Reuters, said he will proceed with the Friday demonstration in front of the mosque regardless of what the court decides on Thursday.

"That's absolutely ridiculous to us," Jones said of the so-called "free speech zones" away from the mosque that city officials want him to use. "For one thing, I think that's totally unconstitutional."

He also said that he will not pay a "peace bond" to cover costs of police security for the demonstration, which was sent to him by Dearborn officials.

He said he has heard that the bond is as high as $100,000, but the papers he has show that it is to cover all costs of holding the demonstration.

Prosecutors argue that the planned gathering by Jones could incite a riot, citing hundreds of email death threats against the preacher.

Jones said he wants to provoke no one, but he will be packing his gun for his own protection. He will appear on Friday, he said with another man from his church and "five or six" supporters in Michigan.

"I have a .40-caliber semiautomatic and a concealed license permit, and I will be wearing that," Jones said. "There will be no provocative actions from us. We are coming in peace."

More than 20 people were killed and dozens injured when riots erupted in Afghanistan after Jones burned a Koran on March 20 inside his Gainesville, Florida, church.

Jones claims he is protesting only against radical Muslims and is not against all who practice Islam.

In a city north of Kandahar earlier this month, seven foreign U.N. staff and five Afghan protesters were killed after demonstrators overran a U.N. office.

The 58-year-old Jones, the head of a small church called the Dove World Outreach Center, drew worldwide condemnation in September over his initial plans to burn the Koran on the anniversary of the September 11, 2001, attacks.

He backed down after pleas from the U.S. government and other world officials, but then presided over a March 20 mock trial of the Koran that included a torching of the book.

Jones has called his demonstration "Stand Up America Now." Local demonstrators in Michigan plan a counter rally under the banner "Stop the Hate."

Jones plans to hold his gathering on Good Friday, the day that Christians honor the crucifixion of Jesus Christ.