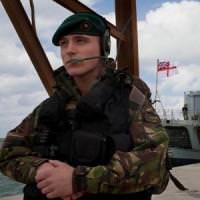 Britain said on Tuesday it would send military officers to advise Libyan rebels, worrying critics who fear the country is being dragged into a civil war.

London said it would send about a dozen officers to Libya to help insurgents improve their organization and communications, but would not arm the rebels or train them to fight.

With the Libyan conflict risking getting bogged down in a long stalemate, Western powers are searching for ways to bolster the rebels, whose military campaigns have been disorganized.

British Foreign Secretary William Hague said the decision to send military advisers was in line with a United Nations' resolution aimed at protecting civilians in Libya and denied Britain was putting military "boots on the ground."

"There is going to be no ground invasion of Libya," Hague told the BBC.

The U.N. resolution bars an occupation force in Libya.

Britain's move is likely to anger Russia, which has already said that Western attempts to topple Libyan leader Muammar Gaddafi violate a U.N. resolution which only authorized the use of force to protect civilians.

"The U.N. Security Council never aimed to topple the Libyan regime," Russian Foreign Minister Sergei Lavrov said in Belgrade on Tuesday. "All those who are currently using the U.N. resolution for that aim are violating the U.N. mandate."

But a French diplomatic source told Reuters Paris might send military liaison officers to Libya in the days ahead.

Several lawmakers from Cameron's Conservative Party called for the recall of parliament, now in recess, to debate the move, saying that the ground had shifted since parliament approved British participation in the Libya no-fly zone last month.

"What the no-fly zone has effectively become is the air force of the rebels," he told Sky News.

Peter Bone, another Conservative lawmaker, voiced concern that Britain seemed to be "taking sides in a civil war."

Britain's recent experiences in the Iraq and Afghanistan wars, where hundreds of British soldiers were killed, have led to caution about new foreign military ventures.

Britain's Foreign Office said the team would advise the rebel interim national council on how to improve its organization, communications and logistics, but would not help plan rebel military operations.

Britain says it has supplied rebels with telecommunications equipment and body armor but not arms.