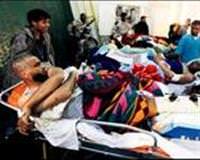 The United Nations food agency said on Tuesday it had started moving food supplies through a new humanitarian corridor into western Libya for civilians in cities including Tripoli.

Libya was a net importer of food before the fighting that has interrupted its supply chains, and the government-run food subsidy program for the poor is no longer functioning, the World Food Program (WFP) said.

A convoy of eight trucks loaded with 240 tones of wheat flour and high-energy biscuits, enough to feed nearly 50,000 people for 30 days, crossed into Libya from Tunisia on Monday, the WFP said in a statement.

The agreement was reached with the Libyan Red Crescent, which will deliver and distribute the rations, and government authorities were informed about the convoy's itinerary. "We asked for safe passage and were assured that we would have safe passage and that's when we were able to send the trucks in," Casella said.

The United Nations appealed on Tuesday for a ceasefire in Misrata, saying at least 20 children had been killed in attacks by besieging government forces on rebel-held parts of the country's third largest city, where hundreds are believed to have died in shelling and sniper fire from Muammar Gaddafi's forces fighting an armed rebellion.

Libya's system of subsidized food delivery has been helping the poor for many years, according to the WFP spokeswoman.

"That system is not fully functional now. There are people who need assistance in all parts of the country. Our humanitarian mandate is to help civilians who need help irrespective of who they are or where they are," she said.

The food will be distributed mainly to women and children in Tripoli, Zintan, Yefrin, Nalut, Mezda, Al Reiba and Al Zawia.

"WFP has already delivered food to Misrata for 40,000 people for a month," Casella said. "If we can again, we will again."