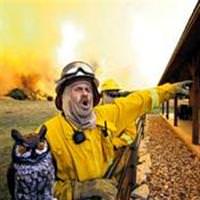 Wildfires in Texas crept closer to the Dallas-Fort Worth area on Tuesday, razing some upscale homes near a lake and threatening hundreds more homes.

The fires started in sparsely populated west Texas and have moved east, helped by bone dry conditions and winds whipping up the flames. Fast moving wildfires moving across steep terrain through trees and lake front property, forcing the evacuation of several small communities and a county jail near Possum Kingdom Lake.

"That fire really made a major run today, and those acres that you see there are going to go up," spokesman Marq Webb said.

"I was seeing flame lengths of 40 feet last night," McNeely said. "The fire's coming at Possum Kingdom Lake from just about every angle at any given time."

Much of Texas is suffering some of the driest conditions in state history. A volunteer firefighter was killed and another critically injured in separate incidents as fires charred more than 1 million acres in 13 days across the state.

The fires razed at least 117 upscale homes along the lake as they spread in the area Monday.

The fires also closed the Possum Kingdom Fish Hatchery, located just below the lake's reservoir dam, according to the Texas Parks and Wildlife Department. The 103-acre facility near Graford is where fingerlings are produced for stocking Texas waters.

Possum Kingdom State Park was evacuated last Friday ahead of wildfires that burned 90 percent of the 1,500-acre park on the south shore of Possum Kingdom Lake and slightly damaged two buildings and two of three sewage treatment system liners. No one was injured, parks department officials said.

U.S. Forest Service firefighters, joined by 14 Texas State Park firefighters, continued today to monitor the park for flames within the thick stands of juniper trees and to help fight fires near the fish hatchery and nearby communities.

Two other state parks that have been threatened by the wildfires in north and west Texas in past days -- San Angelo State Park and Lake Arrowhead State Park -- remain open.

Davis Mountains State Park, which suffered wildfire damage last week, remains closed as does historic Indian Lodge that is located inside the park. A base camp for hundreds of firefighters has been set up inside the state park.