Earth Day organizers call for "a billion acts of green" 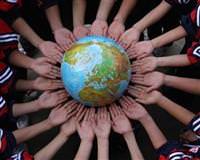 If the environmental movement has a high holiday, Earth Day is it.

The annual effort to raise public awareness about the environment and inspire actions to clean it up marks its 41st anniversary on Friday, coinciding with the Christian Good Friday and Judaism's celebration of Passover.

In an effort dubbed "A Billion Acts of Green," organizers are encouraging people to observe Earth Day 2011 by pledging online at act.earthday.org/ to do something small but sustainable in their own lives to improve the planet's health -- from switching to compact fluorescent light bulbs to reducing the use of pesticides and other toxic chemicals.

There will be hundreds of rallies, workshops and other events around the United States, where Earth Day was born, and hundreds more overseas, where it is now celebrated in 192 countries.

In the United States the activities range from the premiere of the new film from the director of "Who Killed the Electric Car?" (it's called "Revenge of the Electric Car") at the Tribeca Film Festival in New York to a discussion about creating a green economy in 12 cities along the Gulf Coast, where this time last year residents were reeling from the effects of the BP oil spill in the Gulf of Mexico.

In the years since the first Earth Day was celebrated in 1970 the environmentalist movement made great strides with passage of the Clean Air Act, Clean Water Act, the Endangered Species Act and other groundbreaking laws.

But the bipartisanship that marked the birth of Earth Day -- it was sponsored in Congress by a Wisconsin Democrat named Gaylord Nelson and a California Republican named Pete McCloskey -- is often missing in discussions about environmental policy today.

Efforts to fight climate change by regulating greenhouse gases, for instance, face fierce resistance from many Republicans and members of the business community, who dispute the science supporting global warming and warn new rules to regulate emissions will kill jobs and raise energy costs.