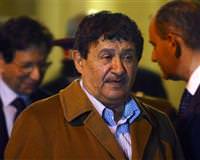 Libya's government accepted a peace proposal put forward by the Addis Ababa-based AU earlier this month, but the rebels immediately rejected the plan as it did not provide for Gaddafi's removal.

The United States, Britain and France also say their month-old air campaign will not end unless Gaddafi leaves power. Mussa Ibrahim said Morocco had been involved in peace efforts and Gaddafi's government was also in contact with Russia, Greece, Turkey and Latin American governments in a bid to agree a peace plan.

"In the next few days and weeks we are intensifying our peaceful efforts. We are supporting the Greek, Turkish, African and Latin American peace initiatives," he told Reuters.

"We are very hopeful that in the next few days, the next week or two, the peaceful proposals... will take shape and will embarrass NATO into accepting them because NATO has to understand that if it is really into peace and democracy in Libya it should stop bombarding us and start talking to us."

Libya's government has made repeated calls for ceasefires, rejected by rebels who say the calls have not been matched by action.

Libya had last week that it spoke to both Russia and Greece last week and discussed a potential ceasefire. Ibrahim confirmed reports from Moroccan sources last week suggesting the North African country was pushing for a peace agreement.

"Morocco has been involved but it hasn't given us a full proposal for peace," he said. "It has talked to the rebels and to us and we are waiting for a well-shaped plan for peace to come from Morocco."