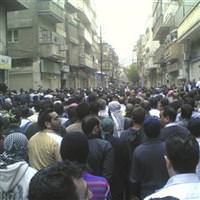 The forces deployed in the old Sunni district of the mixed town on the Mediterranean coast following a pro-democracy protest against the autocratic rule of President Bashar al-Assad the previous night.

Assad, who succeeded his late father as president in 2000, is from Syria's minority Alawite sect, who form a majority in Jabla and have generally stayed away from the protests demanding political freedom and an end to corruption although independent Allawites have condemned the killings.

Sawasiah, an independent organisation, and another human rights activist in contact with Jabla, said security forces also raided the house of Zakraiya al-Akkad, a physician in Jabla, after he spoke Al Jazeera television about the killings in his hometown.

In the coastal city of Banias to the south, protest leaders said they would cut the main coastal highway unless the siege on Jabla was lifted.

Rights campaigners said they feared that Assad's forces were preparing a similar attack on the town of Nawa after reports of bulldozers and military vehicles heading there after thousands called for the overthrow of Assad at a funeral for protesters killed by security forces.

Electricity and communications had been cut off in parts of Nawa by the evening and residents, some armed, erected barriers in the streets in preparation to defend against attack.

"Long live Syria. Down with Bashar!" mourners chanted, their calls audible in am earlier telephone call during the funeral in Nawa, 25 km north of the city of Deraa where demonstrations against Assad's rule erupted last month.

"Leave, leave. The people want the overthrow of the regime."

At least 100 people were killed across Syria on Friday, the highest toll in five weeks of unrest, when security forces shot protesters demanding political freedoms and an end to corruption in their country, ruled for 41 years by the Assad dynasty.

Another 12 more people were killed on Saturday at mass funerals for the slain protesters, and rights campaigners said secret police raided homes near Damascus and in the central city of Homs on Sunday, arresting activists.

Assad assumed power when his father died in 2000 after ruling Syria for 30 years. The hostile chants in Nawa on Sunday reflect a steady hardening of the demands of protesters who at first called for greater freedoms but now seek his overthrow.

International condemnation of Assad has also intensified. Western criticism was initially muted because of lingering hopes that Assad might implement genuine reform and because revolution in Syria would reshape the political map in the Middle East.

An eminent jurists' group said on Sunday the U.N. Security Council must investigate "mass killings" by the security forces which it said may warrant prosecution by the International Criminal Court. Human Rights Watch also called for a U.N. investigation and for international sanctions on Syria.

"Those ordering and carrying out these attacks, including those firing live rounds into crowds, must be held criminally accountable," said Wilder Tayler, secretary-general of the International Commission of Jurists.

The Syrian Observatory for Human Rights said dozens of people were arrested by security forces after the demonstrations on Friday, including nine in Idlib province, four in Syria's second city of Aleppo and five in eastern Raqqa province.

Mansour al-Ali, a prominent figure from the minority ruling Alawite sect, was arrested in Homs after he spoke out against the shooting of protesters, an activist in Homs said.