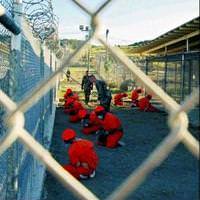 A cache of classified U.S. military documents provides intelligence assessments on nearly all of the 779 people who been detained at the Guantanamo Bay prison in Cuba.

The secret documents, made available to The New York Times and several other news organizations, reveal that most of the 172 remaining prisoners have been rated as a "high risk" of posing a threat to the United States and its allies if released without adequate rehabilitation and supervision, the newspaper said.

The documents, provided by WikiLeaks, also show about a third of the 600 detainees already sent to other countries were also designated "high risk" before they were freed or passed to the custody of other governments, the Times said in its report late on Sunday.

The dossiers, prepared under the Bush administration, also show the seat-of-the-pants intelligence gathering in war zones that led to the incarcerations of innocent men for years in cases of mistaken identity or simple misfortune, the Times said.

The documents are largely silent about the use of the harsh interrogation tactics at Guantanamo that drew global condemnation, the newspaper reported.

President Barack Obama pledged two years ago to close the prison at U.S. naval base in Cuba but it remains in legal limbo.

Obama administration officials condemned the leaking of the documents but said the material is out of date.

Pentagon spokesman Geoff Morrell and State Department envoy Dan Fried said in a joint statement that the administration's Guantanamo review panel, established in January 2009, had made its own assessments.

"The assessments of the Guantanamo Review Task Force have not been compromised to Wikileaks. Thus, any given DAB (Detainee Assessment Briefs) illegally obtained and released by WikiLeaks may or may not represent the current view of a given detainee," the statement said.

This was the latest batch of secret U.S. documents dumped by WikiLeaks, which had previously released classified Pentagon reports on the wars in Afghanistan and Iraq and 250,000 State Department cables.

Bradley Manning, a 23-year-old U.S. soldier accused of leaking secret documents to WikiLeaks has been detained since May of last year.

The Guantanamo detention camp was opened to house prisoners captured in the U.S.-led Afghan war launched by President George W. Bush soon after the September 11, 2001, attacks on the United States.