Some 500 arrested in Syria crackdown 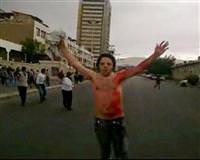 Security forces have arrested some 500 pro-democracy sympathizers across Syria after the government sent in tanks to try to crush protests in the city of Deraa, the Syrian rights organization Sawasiah said on Tuesday.

The independent organization said it had received reports that at least 20 people had been killed in Deraa since tanks moved in on Monday, but communications with the southern town where the protests against President Bashar al-Assad began on March 18 had been cut making it hard to confirm the information.

"Witnesses managed to tell us that at least 20 civilians have been killed in Deraa, but we do not have their names and we cannot verify," said a Sawasiah official, adding that two civilians were confirmed dead in the Damascus suburb of Douma, which forces entered earlier in the day.

At least 500 were arrested elsewhere in Syria, it said.

Amnesty international, citing sources in Deraa, said at least 23 people were killed when tanks shelled Deraa in what it called "a brutal reaction to people's demands."

"By resorting to the use of artillery against its own people today, the Syrian government has shown its determination to crush the peaceful protests at virtually any cost, whatever the price in Syrians' lives," said Malcolm Smart, Amnesty International's Middle East and North Africa Director.

Government forces also stormed the Damascus suburbs of Douma and Mouadhamiya on Monday, shooting and making arrests, a day after they swept into the coastal town of Jabla, where at least 13 civilians were killed, rights campaigners said.

Diplomats said the figures for civilians killed could be as high as 50 in Deraa and 12 in Mouadhamiya, which lies on the road to the occupied Golan Heights southwest of Damascus.

"The regime has chosen to use excessive violence. It worked in 1982, but there is no guarantee it will work again in the age of the internet and phone cameras," said a senior diplomat referring to the 1982 crushing of a revolt in the city of Hama which killed up to 30,000 people.

Footage posted on the internet by demonstrators in recent days appears to show troops firing on unarmed crowds. In the Damascus suburb of Barzeh residents described security forces firing at unarmed protesters from a heavy machinegun mounted on a truck.

The White House, deploring "brutal violence used by the government of Syria against its people," said President Barack Obama's administration was considering targeted sanctions to make clear that "this behavior is unacceptable."

Syria has been under U.S. sanctions since 2004 for its support of militant groups. Several Syrian officials, among them Assad's cousin Rami Makhlouf, a tycoon, are under specific U.S. sanctions for "public corruption."

"President Assad's intentions have been clear since he came out publicly saying he is 'prepared for war'," Atassi said, referring to a March 30 speech to parliament.

Security forces and the gunmen loyal to Assad have killed more than 350 civilians across Syria since pro-democracy protests broke out in Deraa, rights groups say. A third of the victims were shot in the past four days as the scale and breadth of a popular revolt against Assad grew.