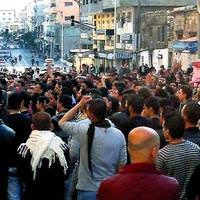 From Israel to Iran, Syria's neighbours are starting to contemplate the possibility of a future without the Assad family as Lords of Damascus, and, whether friends or foes, some don't like what they see.

Indeed, some are in denial about what they are witnessing.

Hezbollah, the Lebanese Shi'ite movement widely seen as an Iranian proxy in the Middle East, purports to believe the government of President Bashar al-Assad is putting down an insurrection by armed gangs of Salafi or Sunni Muslim fanatics.

In its report of the Syrian army's assault on the southern city of Deraa, epicentre of the revolt which began last month, Al Manar, Hezbollah's television, stuck to the official version that the army responded to citizens' pleas to put an end to "killings and terrorising operations by extremist groups".

Hezbollah greeted with glee uprisings that overthrew dictatorships in Tunisia and Egypt and championed the rights of Bahraini protesters against Saudi military intervention to quash Shi'ite demonstrations.

But it is distinctly unenthusiastic about the risk of losing the support of a Syrian government which is not only its main protector but the conduit for arms supplies from Iran.

Tehran, which regards Syria as a close ally in a mainly Sunni-dominated region suspicious of non-Arab Shi'ite Iran, has called the revolt in Syria "a Zionist plot".

Yet Israel too seems deeply uneasy about any change in the status quo.

Although they are still formally at war, Syria under the current president and his late father, Hafez al-Assad, has maintained a stable border with the Jewish state since 1973 even though Israel still occupies the Golan Heights.

Israel's fear -- voiced more openly by commentators plugged in to its security establishment than by politicians -- is that a successful uprising might replace firm Baath party rule with a more radical government, or one less able or willing to keep radical forces on a leash.

Although Assad sponsors Hezbollah guerrillas in Lebanon and Palestinian militant groups Hamas and Islamic Jihad, he has played a cautious hand.

Behind the strident Arabist rhetoric and ties with Tehran he has kept the option of peace with Israel in play and sought acceptance by Western powers.

"What makes Syria distinctive is that the regime and the system have close structural links with every conflict or player in the region: Hezbollah, Hamas, Iran, Lebanon, Israel, America, Iraq, Turkey. In all these (cases) there is a Syrian link."

Demonstrations have spread across the country and grown in intensity, he said, and protesters who began calling for reform of the system were now demanding "the overthrow of the regime".

At the back of many minds is the experience of Iraq, plunged into years of chaos and sectarian savagery after the US-led invasion in 2003 and removal of Saddam Hussein.

"Everybody in the region is concerned about the destabilisation of Syria, even those who don't like Assad, because there is one thing he brings to the region: a certain kind of predictability and stability," Khouri said.

"He maintained the truce along the Syrian-Israeli border, people know how his government behaves. Nobody knows what will happen afterwards."

"However odd it may sound, the Israeli establishment has a certain sentiment for the Assad family. They kept their promises throughout the years and even talked about an arrangement with Israel on their terms," he wrote.

"It's hard to part with a comfortable old slipper, but the top members of the political and security establishment believe that the Syrian regime, in its current format, will change within weeks or months," Fishman said.

He added: "The sole interest guiding Israel's conduct is: if what is happening in Syria will ultimately weaken the Damascus-Iran-Hezbollah axis -- we'll come out ahead."

For Hezbollah and Iran, losing Assad would certainly be a big blow.

"If it (Syria) splits into mini-satellite states that will be bad news for everybody," Khouri said, suggesting that as in Iraq this might provide an opening for al Qaeda militants.

Across the border in Lebanon, arena of a sectarian civil war in 1975-90 that sucked in regional and world powers and left Syria in control for 29 years, people are also worried.

Any prospect of a new sharpening of tensions between Sunnis and Shi'ites, Arabs and Kurds, or Christians and Muslims, all simmering across the region after being brought to the boil by Iraq, produces shudders.

"I don't think any wise man is not worried about what happens in Syria because it is a neighbour," said Talal Salman, editor of Beirut's daily as-Safir.

"Any earthquake in Syria will shake Lebanon with its fragile make-up. Syria's stability is in our interest."

For now, Assad has decided to follow in the footsteps of his father and resort to military force, not reform, to put down the protests at a cost so far of more than 400 lives, according to human rights groups.

Monday's deployment of tanks in Deraa looks like an indicator of what is to come. A source close to the Syrian military said Assad and his security establishment had taken a decision to wage war on protesters across the country.

But Ali al-Atassi, a prominent Syrian activist whose father was a former president jailed for 22 years by the elder Assad, said "another Hama" was impossible.

"Syria has reached a turning point. It cannot go back to where it was," said Atassi.

He said the Western habit of accommodating dictatorships in return for stability was no longer valid.

"In Tunis, Egypt and elsewhere for years, Arab leaders and the West gave the Arab people a binary choice: stability or chaos; despotism or Islamism.

"After what happened in Tunis and Egypt, we discovered that there is a third option which is the democratic way. Sure, the Islamists will play a role in it, but they will not have the leading role," Atassi said.

While many analysts argue that life after Assad would be hazardous or that he may prove impossible to remove, others say a relatively smooth transition is imaginable over time because Damascus has institutions that can shoulder responsibility.

They include the army, whose backbone is Sunni although key posts are controlled by members of Assad's Alawite minority.

What most observers now dismiss is the possibility of reforms substantial enough to meet popular demands.

Even if Assad wanted to enact wide-scale reforms, they argue, he lacks the power to prevail over entrenched interests in the security forces and military intelligence.

"He is the prisoner of a certain structure and at the same time part of it," Atassi said.

"The next 2-3 weeks are really critical. They will determine whether he will remain in power or whether his regime will collapse," Khouri told Reuters.