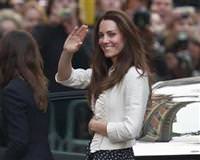 The wait is nearly over for Prince William and Kate Middleton, who are to marry at Westminster Abbey on Friday in a dazzling display of royal pomp and pageantry set to draw a huge audience at home and abroad.

Hundreds of thousands of people are expected to cram the flag-lined streets of London to catch a glimpse of cavalrymen in shining ornamental breastplates, groomed horses and the ornate carriages that will carry senior royal figures from the service.

Some 8,000 reporters and support staff have descended on the capital to capture the occasion in words and images, and, while some question a government estimate of a global audience of two billion, hundreds of millions are certain to tune in.

Die-hard fans camped out across the street from the abbey to ensure a front-row view of the royal couple and their guests, who start arriving at the abbey from 8:15 a.m. in time for the 11 a.m. start of the service.

"The atmosphere has been truly amazing, the crowd is buzzing," Canadian Jay Edmonds told Reuters as dawn broke outside Westminster Abbey on Friday. "I managed to catch just a few hours sleep in a doorway but I don't mind.

"Today is a once in a lifetime opportunity and I had to be there."

For others, it was an event to avoid, reflecting divided public opinion about the biggest royal occasion for nearly a decade and one which supporters hope heralds a renaissance for a monarchy that, following the divorce and death of Princess Diana, had seemed at peril from calls for a British republic.

"It's just a wedding," said 25-year-old Ivan Smith. "Everyone is going mad about it. I couldn't care less."

Among 1,900 guests at Westminster Abbey, the coronation site for the monarchy since William the Conqueror was crowned in 1066, will be David and Victoria Beckham, Elton John, royalty from around the world, politicians and friends of the couple.

No longer on the guest list, however, is the Syrian ambassador, whose invitation was withdrawn on the eve of the wedding in response to his country's violent crackdown on pro-democracy demonstrators.

The marriage between William, second in line to the throne, and girlfriend Middleton, dubbed "Waity Katie" for their long courtship, has cemented a recovery in the monarchy's popularity.

A series of scandals involving senior royals, Britain's economic difficulties and Diana's death in 1997 aged 36 in a car crash after her divorce from Prince Charles led many to question the future of an institution rooted in the imperial past.

But William's image as a more rounded, less distant figure than his father, and the fact that Middleton, 29, is the first "commoner" to marry a prince in close proximity to the throne in over 350 years, appear to have worked in the monarchy's favour.

In a surprise walkabout on Thursday evening, the groom reached into the crowds waiting on the Mall, the avenue leading to Buckingham Palace, shaking hands and chatting happily with delighted members of the public.

A Daily Mail survey showed 51 percent of people believed the wedding would strengthen the monarchy in Britain, compared with 65 percent who said the marriage between Prince Charles and Camilla Parker Bowles in 2005 would weaken it.

However, while the Queen , 85, exercises limited power, and is largely a symbolic figurehead in Britain and its former colonies, critics question the privileges she and her family enjoy, particularly at a time when the economy is so weak.

Some estimates say the cost of deploying some 5,000 police officers on the streets on Friday, not to mention intelligence and military personnel, could exceed 10 million pounds.

"I personally think it's a waste of money," said Ollie Sam, a 26-year-old London artist.

Tourism chiefs predict an extra 600,000 visitors to London for the wedding, bringing in up to 50 million pounds, but economists say the negative impact of the extra public holiday declared on Friday is likely to be far greater.

Palace officials have released many of the details of the service and subsequent events on Friday, but the big secret remains the identity of the designer of Middleton's dress.

That closely guarded secret will only be known as she steps out of her car and walks into Westminster Abbey to become royal and begin life in the glare of the media spotlight.

William, 28, has deliberately tried to keep the memory of his mother alive -- he gave Middleton his mother's sapphire and diamond engagement ring.

During the service, to be streamed live on YouTube, Middleton will not promise to "obey" William as part of her wedding vows, and he will not wear a wedding ring. Her ring will be made out of Welsh gold.

After the marriage, the couple leave the abbey in a carriage to Buckingham Palace, the queen's London residence, where they will appear on the balcony and are expected to kiss before the crowd assembled outside the gates.

About 5,500 street parties will be held across Britain, in keeping with tradition, although they will be more common in the more affluent south of England than in the poorer north.

The weather is likely to have a bearing on the turnout, with the Met Office forecasting the possibility of heavy showers around lunchtime.