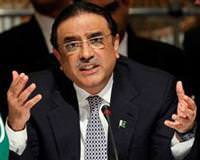 Pakistan's president acknowledged for the first time on Tuesday that his security forces were left out of a U.S. operation to kill Osama bin Laden, but he did little to dispel questions over how the al Qaeda leader was able to live in comfort near Islamabad.

The revelation that bin Laden had been holed up in a compound in the military garrison town of Abbottabad, possibly for years, prompted many U.S. lawmakers to demand a review of the billions of dollars in aid Washington gives to nuclear-armed Pakistan.

"He was not anywhere we had anticipated he would be, but now he is gone," Pakistan President Asif Ali Zardari wrote in an opinion piece in the Washington Post, without offering further defense against accusations his security services should have known where bin Laden was hiding.

"Although the events of Sunday were not a joint operation, a decade of cooperation and partnership between the United States and Pakistan led up to the elimination of Osama bin Laden as a continuing threat to the civilized world."

It was the first substantive public comment by any Pakistani civilian or military leader on the raid by a secret U.S. assault team on bin Laden's compound in the early hours of Monday.

Pakistan has faced enormous international scrutiny since bin Laden was killed by U.S. special forces, with questions over whether its military and intelligence were too incompetent to catch him themselves or knew all along where he was hiding.

The White House said intelligence on the compound had not been shared with any other country, including Pakistan, to ensure security.

Irate U.S. lawmakers wondered how it was possible for bin Laden to live in a populated area near a military training academy without anyone in authority knowing about it.

They said it was time to review aid to Pakistan. The U.S. Congress has approved $20 billion for Pakistan in direct aid and military reimbursements partly to help Islamabad fight militancy since bin Laden masterminded the September 11, 2001 attacks.

"Our government is in fiscal distress. To make contributions to a country that isn't going to be fully supportive is a problem for many," said Senate Intelligence Committee Chair Dianne Feinstein.

The White House acknowledged there was good reason for U.S. lawmakers, already doubtful of Pakistan's cooperation against al Qaeda, to demand to know whether bin Laden had been "hiding in plain sight" and to raise questions about U.S. aid to Islamabad.

"The failure of Pakistan to detect the presence of the world's most wanted man here is shocking," The News said in an editorial.

Echoed the Daily Times: "How he was able to hide there without any action on our part is going to be a hard sell to the Americans."

Pakistan has a long history of nurturing Islamist militants in the interests of its strategic objectives, primarily facing up to what it sees as its biggest threat -- India. Pakistan's fear of India has been at the root of its support for the Afghan Taliban and separatist militants in Indian Kashmir.

The body of the world's most powerful symbol of Islamist militancy was buried at sea after he was shot in the head and chest by U.S. special forces who were dropped inside his sprawling compound by Blackhawk helicopters.

Bin Laden, 54, was given a sea burial after Muslim funeral rites on a U.S. aircraft carrier, the Carl Vinson. His shrouded body was placed in a weighted bag and eased into the north Arabian Sea, the U.S. military said.

Analysts warned that objections from some Muslim clerics to the sea burial could stoke anti-American sentiment. The clerics questioned whether the United States followed proper Islamic tradition, saying Muslims should not be buried at sea unless they died during a voyage.

Bin Laden's death had initially boosted the dollar and shares on a perception that his killing reduced global security risks.

But Asian shares dipped on Tuesday and the dollar struggled to pull away from a three-year low, as the financial risk taking faded and investors refocused attention on the fragile state of the world economy.

Bin Laden's hideaway, built in 2005, was about eight times larger than other homes nearby. With its 12-18 foot (3.7-5.5 meter) walls topped with barbed wire, internal walls for extra privacy, and access controlled through two security gates, it looked like a strongman's compound.

White House counterterrorism chief John Brennan said it was "inconceivable that bin Laden did not have a support system in the country that allowed him to remain there for an extended period of time."

President Barack Obama was given a standing ovation by Democratic and Republican lawmakers at a White House dinner.

But the euphoria that drew flag-waving crowds to "Ground Zero," location of the September 11, 2001, attack in New York, was tempered by calls for vigilance against retaliation by his followers.

Obama plans to travel to New York on Thursday to visit Ground Zero and meet families of September 11 victims.

The U.S. administration was weighing whether to release a photo of bin Laden's body as proof that he had been killed. There was also a video of the sea burial but it was not clear if it would be released, a U.S. official said.

Americans clamored for details about the secret U.S. military mission.

A small U.S. strike team, dropped by helicopter into bin Laden's hide-out under the cover of night, shot the al Qaeda leader to death with a bullet to the head. He did not return fire.

Bin Laden's wife, originally thought killed, was wounded. Another woman was killed in the raid, along with one of bin Laden's sons, in the tense 40 minutes of fighting. She had not been used as a human shield as first thought.

Television pictures from inside the house showed bloodstains smeared across a floor next to a large bed.

Obama and his staff followed the raid minute-by-minute via a live video feed in the White House situation room, and there was relief when the commandos, including members of the elite Navy SEALs, stormed the compound.

"We got him," the president said, according to Brennan, after the mission was accomplished.

National Journal said U.S. authorities used intelligence about the compound to build a replica of it and use it for trial runs in early April.

Under bin Laden, al Qaeda militants struck targets from Indonesia to the European capitals of Madrid and London.

But it was the September 11 attacks, in which al Qaeda militants used hijacked planes to strike at economic and military symbols of American might and killed nearly 3,000 people, that brought bin Laden to global infamy.

Obama, whose popularity has suffered from continuing U.S. economic woes, will likely see a short-term bounce in his approval ratings. At the same time, he may face more pressure from Americans to speed the planned withdrawal this July of some U.S. forces from Afghanistan.

However, bin Laden's death is unlikely to have any impact on the nearly decade-long war in Afghanistan, where U.S. forces are facing record violence by a resurgent Taliban.

Many analysts see bin Laden's death as largely symbolic since he was no longer believed to have been issuing operational orders to the many autonomous al Qaeda affiliates.