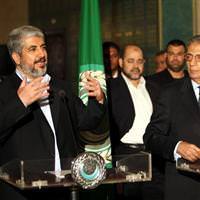 Palestinian President and Fatah leader Mahmoud Abbas and Hamas leader Khaled Meshaal were in Cairo on Wednesday to endorse a deal to end a four-year rift between the secular Fatah group and its Islamist rival.

The Egyptian-brokered deal, denounced by Israel, calls for forming an interim government to run the occupied West Bank and Gaza Strip and prepare for a general election within a year.

"The signing has been done, everyone signed. Today is the crowning of this achievement," said senior Fatah official Nabil Shaath, speaking shortly before the ceremony.

Officials from all Palestinian factions earlier signed the deal. It was not immediately clear why Meshaal and Abbas were not going to put their own signatures to the agreement.


Minister of Foreign Affairs Ahmet Davutoğlu was also in attendance at the ceremony.