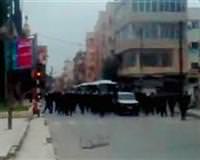 Hundreds of ordinary Syrians have been charged with "degrading the prestige of the state," the Syrian Observatory for Human Rights said, in President Bashar al-Assad's drive to crush protests against his autocratic rule.

The charge, which carries a 3-year prison sentence, was lodged on Tuesday against hundreds of people detained in the last few days, particularly in the run-up to Friday prayers, which have seen increasingly large pro-democracy demonstrations.

"Mass arrests are continuing across Syria in another violation of human rights and international conventions," said Observatory director Rami Abdelrahman.

Other rights organizations said many male detainees had been beaten severely in a campaign of arrests that included women, teenagers and the elderly but has failed to deter protesters' appetite for reforms. Syria already has thousands of political prisoners.

The campaign intensified after a tank-backed army unit, headed by Assad's feared brother Maher, last week shelled and machine-gunned into submission the old quarter of Deraa, cradle of the six-week-old uprising.

The demonstrations began with demands for political freedom and an end to corruption and now seek the overthrow of Assad, a member of the minority Alawite Shi'ite sect whose family has ruled majority Sunni Muslim Syria for 41 years.

Security forces have killed at least 560 civilians in attacks on demonstrators since the protests erupted in Deraa on March 18, according to human rights groups.

U.S. State Department spokesman Mark Toner said on Tuesday the use of tanks, arbitrary arrests and cuts in power in Deraa was "...quite barbaric and amounts to the collective punishment of innocent civilians."

Residents of Damascus suburbs, where many were arrested, said roadblocks and arrests had intensified this week in areas around the capital. One resident said she saw plainclothes security forces putting up sandbags and a machinegun on a road near the town of Kfar Batna on Tuesday.

"They are putting up roadblocks everywhere to prevent movement. Friday will be another test. Assad has decided to use violence. He has not learnt from the Tunisian and Egyptian revolutions," the official told Reuters.

At least six people were arrested after security forces swept into the coastal city of Banias on Tuesday, taking control of another urban center from demonstrators challenging Assad.

"They moved into the main market area. The army has sealed the northern entrance and security forces (sealed) the south,"

"They armed Alawite villages in the hills overlooking Banias and we are now facing militias from the east," he said.

But around 1,000 protesters marched in the Sunni district of Banias, just south of the main market, carrying loaves of bread to symbolize solidarity with the people of Deraa, a rights campaigner who provided photos of the demonstration said.

Deraa resident Abu Muhammad said: "They are still dragging anyone who is less than 40 years of age to the Deraa stadium where they have held hundreds, including several women, in the last week without shelter."

A small student demonstration erupted in the University of Aleppo to the north on Tuesday and thousands marched in the eastern, mostly Kurdish, city of Qamishli, carrying candles and chanting freedom slogans.

International condemnation of the violent repression has intensified since the Deraa assault, which revived memories of the 1982 repression of an armed Islamist uprising in the city of Hama by Assad's father, President Hafez al-Assad.

Germany and Britain said they were seeking the imposition of European Union sanctions against Syrian leaders -- after a U.S. announcement of sanctions last week -- and France said Assad should be among the targets of sanctions.

Turkish Prime Minister Tayyip Erdogan told A-TV, a Turkish news channel, that Assad had failed to act on his advice to carry out democratic reforms and release political prisoners.

"He says he will do it, but honestly I am having doubts..." said Erdogan, who has telephoned Assad several times.

In a sign that the violence has damaged economic activity, the chairman of the Union of Arab Banks told Reuters on Tuesday that up to eight percent of Syrian pound deposits in Syria had been converted to dollars since the unrest began.