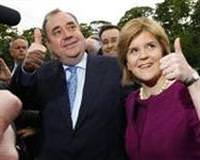 The Scottish National Party has won a majority in the Scottish parliament, results showed on Friday, paving the way for a referendum on Scotland's independence from Britain.

The party aims to hold the vote within five years. Secession may have implications for the division of revenues from British North Sea oil and gas fields and for major firms headquartered in Scotland, such as the Royal Bank of Scotland which is 83 percent-owned by the British state.

SNP leader Alex Salmond was assured of a second consecutive term as Scotland's first minister in what he described as an "historic" vote. He had headed a minority government after a razor-thin win in the last Scottish parliament polls in 2007.

The new government's immediate priority will be to strengthen the Scotland Bill now going through the British parliament in London to give more economic powers to the devolved Scottish assembly, Salmond said.

"We have a majority of the seats but no monopoly on wisdom and we welcome the support across the parliament as we seek to pursue these powers," he told reporters on a lawn outside an Edinburgh hotel where he arrived by helicopter.

The SNP reached an outright majority with 69 seats in the 129-member parliament, Labour won 37, the Conservatives 15 and the Liberal Democrats five.

Iain Gray announced he would stand down as Labour's Scottish leader later in the year after his party, traditionally strong in Scotland, lost seats.

The SNP has long pledged to hold a referendum on Scottish independence. However, support for ending the 300-year-old union with England is lukewarm among the 5 million Scots.

A survey by the Scottish Sunday Mail newspaper published last month showed that, while more Scots wanted a referendum on independence than opposed it, only 33 percent would back separation from Britain and 43 percent preferred the status quo.

Moreover, opposition from central government to Scotland's independence would be fierce, not least because of its economic consequences.

Official estimates show that in the three years between 2008 and 2011, the British government raked in 28.74 billion pounds ($47.10 billion) in revenues from oil and gas production, the bulk of which is based in the North Sea.

"If they want to hold a referendum, I will campaign to keep our United Kingdom together with every single fiber that I have," British Prime Minister David Cameron told BBC television.

The SNP government hit the headlines in 2009 when it freed convicted Lockerbie bomber Abdel Basset al-Megrahi on compassionate grounds. Megrahi, believed to be suffering from terminal cancer, returned to Tripoli and is still alive.

Scotland's Justice Minister Kenny MacAskill, who made the decision to release Megrahi, comfortably retained his parliamentary seat in Edinburgh on Friday.

Since devolution in 1999, the Edinburgh-based parliament has taken control of health, education, the legal system and other issues and is seeking greater financial independence.

"They (SNP) have promised a lot in their manifesto and it begs the question of how they are going to pay for all these things at a time of austerity," said Tom Lundberg, politics lecturer at the University of Glasgow.