UK's William and Kate off on honeymoon -- at last 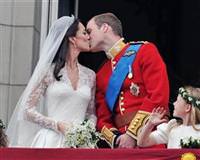 Britain's Prince William and his new wife Kate have set off for a delayed honeymoon following their wedding last month, St James's Palace said on Tuesday.

The couple flew out on Monday, a royal source said, but no details were given of their destination, other than that it was outside Britain.

"They have left for their honeymoon and the couple have asked for their privacy to be respected ..," a spokesman for William said.

Press speculation about where the newly-weds would go has been rife, with Kenya and the Caribbean seen as possible destinations. The Daily Mirror said on Tuesday the couple had arrived in the Seychelles in the Indian Ocean.

Their wedding on April 29 attracted about a million well-wishers onto the streets of London and a global TV audience estimated by media to be as high as 2.4 billion.

The couple, now officially known as the Duke and Duchess of Cambridge, caused a surprise the day after their marriage when they said they were not leaving immediately on honeymoon.

Instead William returned to work as a Royal Air Force search and rescue helicopter pilot and Kate was spotted pushing a shopping trolley in a supermarket car park near their home in Anglesey, Wales.