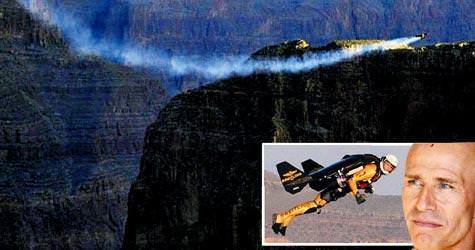 Few people say they witnessed it for themselves, but a Swiss daredevil dubbed "Jetman" said he made a successful weekend flight over the Grand Canyon in a custom-made, winged jet pack.

Pilot Yves Rossy rocketed across a portion of the western end of the canyon owned by the Hualapai Indian Reservation on Saturday morning, according a statement released three days later by sponsors from the Swiss watch manufacturer Breitling.

"My first flight in the U.S. is sure to be one of the most memorable experiences in my life, not only for the sheer beauty of the Grand Canyon, but the honor to fly in sacred Native American lands," Rossy said in the statement.

"Thank you Mother Nature and the Hualapai Tribe for making my lifelong dreams come true," he said.

The statement said Rossy was "launched" from a helicopter at 8,000 feet, then streaked over the rim of the canyon before deploying a parachute to land safely on the canyon floor eight minutes later.

At Breitling's invitation, a large group of reporters, photographers and television camera crews had flocked to the remote site in northeastern Arizona on Friday for what the company said would be a public exhibition of Rossy's attempt to fly over the canyon.

But by day's end, the media were told that Rossy had canceled his flight due to last-minute delays in obtaining approval from the Federal Aviation Administration, leaving him too little time for a practice run.

The flight he made the next day, with few observers present but his own support team, ended up being his only attempt due to changing wind conditions, said Rachel Jones-Pittier, a spokeswoman for the public relations firm Breitling hired.

"There was no secrecy or anything like that intended," she said. "It just happened that we were unable to invite any media back out there for a replacement event."

FAA spokesman Ian Gregor said the agency only became aware of Rossy's plans days earlier through the media and worked hard to get the necessary clearance for his jet-powered wing, which "doesn't fit neatly into any aircraft category."

"Mr. Rossy was authorized to fly on Friday and Saturday," Gregor said. "We do not know if he actually flew on Saturday."

Jones-Pittier acknowledged that no one from independent media organizations -- let alone her firm -- was on hand to witness the flight, one reason, she said, for the three-day delay in telling the world about it.

She said it took that long to put together the package of photographs and video footage released with the announcement.

"We waited until we had photos and video to announce it so people would believe it," Jones-Pittier said.

The footage shows a man with a winged jet pack and helmet dropping out of a helicopter at high altitude, then cuts to shots of a winged figure streaking over rugged landscape at some distance. But the authenticity of the still photos and video could not be independently verified.

One self-described eyewitness was Robert Bravo, 47, chief executive of the Hualapai tribe-owned Grand Canyon Resort Corp, who told Reuters he watched the stunt from a vista point with his son and daughter, aged 14 and 20.

"You could see him come out of the helicopter ... he was so small compared to the grandeur of the canyon," Bravo recalled. "I was in awe the whole time I was watching him."

Bravo said the tribe, which oversees the canyon's Skywalk tourist attraction, granted Rossy a permit for the flight, but he declined to say how much was charged for it.

Rossy, a licensed pilot who has flown airliners, made headlines in 2008 when he flew his jet suit across the English Channel from France to England. The following year, he crashed into the sea off Morocco while trying to become the first person to cross the Strait of Gibraltar to Spain.