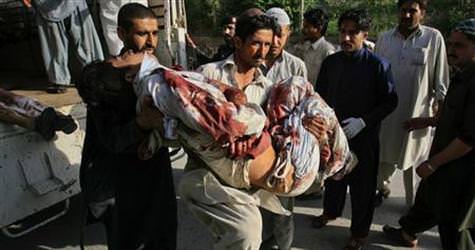 Pakistani Taliban suicide bombers killed at least 80 people at a paramilitary force academy in the northwest on Friday, and vowed further bloodshed in retaliation for the death of Osama bin Laden in a U.S. raid in the country.

The first major bombing in Pakistan since bin Laden's death on May 2, it will reinforce the common view that his elimination will not ease violence because al Qaeda is not centralized and will keep inspiring groups, like the Pakistani Taliban, which are scattered globally and loosely bound by ideology.

"It's the first revenge for the martyrdom of ... bin Laden. There will be more," Taliban spokesman Ehsanullah Ehsan said by telephone from an undisclosed location.

The bomber struck soon after dawn as the recruits were on their way out of the gates of the Frontier Constabulary academy in the town of Charsadda on leave.

"It was a suicide bombing," said Nisar Sarwat, police chief of Charsadda, a market town surrounded by wheat fields 135 km (85 miles) from the capital Islamabad.

One of the suicide bombers was on a motorcycle and police were investigating reports that the other attacker was too, he said.

Of the dead, 65 were recruits. Sixty people were wounded.

In the last major attack in Pakistan, an unstable South Asian country with a stagnant economy, two Taliban suicide bombers killed at least 41 people at a Sufi shrine on April 3 in a central city.

A new push by militants is the last thing Pakistan needs now.

The U.S. special forces operation to kill bin Laden embarrassed the Pakistani government and military, who are under pressure to explain how the al Qaeda chief lived undetected in the garrison town of Abbottabad, about a two hour drive from intelligence headquarters in Islamabad.

The United States, which has questioned Pakistan's reliability as a partner in the American war on militancy, provides billions of dollars of aid to Islamabad.

Security force camps, posts and training grounds have been attacked repeatedly in Pakistan over recent years and many civilians have died.

The scene outside the academy was familiar -- pools of blood mixed with soldiers caps and shoes. The wounded, looking dazed with parts of their clothes ripped by shrapnel, were loaded into trucks.

Body parts of the suicide bomber served as a reminder of the steady supply of Pakistanis willing to blow themselves up, inspired by al Qaeda's calls for holy war.

"As we were sitting in the buses there was a small blast. Within moments there was a second, big blast. I fell on the road and became unconscious," said soldier Shafeeq-ur-Rehman, whose leg was wounded in the blast.

As he spoke from a bed at Lady Reading hospital in the city of Peshawar, tearful people brought in dead and wounded relatives to the facility that has treated thousands of victims of the struggle between the army and militant groups.

"Why are we being killed? Whose war is this? What is our sin"," asked an elderly man with a grey beard as the body of his teenage son was carried in on a stretcher.

The Pakistani Taliban launched their insurgency in 2007 after a military raid on Islamabad's Lal Masjid, or Red Mosque, where militant leaders and others were holed up.

A series of army offensives against their bases in the lawless Pashtun tribal belt on the Pakistan-Afghanistan border have failed to break their resolve. They just move from one mountain area to another when the heat is on.

The killing of bin Laden in Pakistan is thought unlikely to weaken the Pakistan Taliban, while the United States has stepped up drone attacks on militants since bin Laden's death.

One of bin Laden's widows told investigators he lived in Pakistan for more than seven years, security officials said.