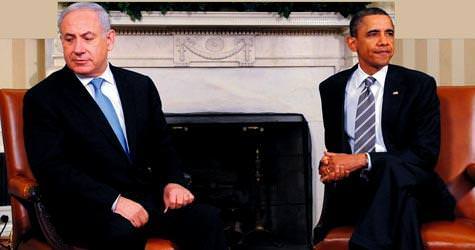 In an unusually sharp rebuke to Israel's closest ally, Netanyahu insisted Israel would never pull back to its 1967 borders -- which would mean big concessions of occupied land -- that Obama had said should be the basis for negotiations on creating a Palestinian state.

"Peace based on illusions will crash eventually on the rocks of Middle East reality," an unsmiling Netanyahu said as Obama listened intently beside him in the Oval Office after they met for talks.

Netanyahu insisted that Israel was willing to make compromises for peace, but made clear he had major differences with Washington over how to advance the long-stalled peace process.

Netanyahu's resistance raises the question of how hard Obama will push for concessions he is unlikely to get, and whether the vision the U.S. leader laid out on Thursday to resolve the decades-old conflict will ever get off the ground.

Despite assurances of friendship by both leaders, this week's events also appeared to herald tense months ahead for U.S.-Israeli relations, even as the Arab world goes through political tumult and Palestinians prepare a unilateral bid this fall to seek U.N. General Assembly recognition for statehood.

Speaking to reporters after the meeting, Obama said he reiterated to Netanyahu the peace "principles" he offered on Thursday in a policy speech on the Middle East upheaval.

The goal, he said, "has to be a secure Israeli state, a Jewish state, living side by side in peace and security with a contiguous, functioning and effective Palestinian state.

Obama on Thursday embraced a long-sought goal by the Palestinians: that the state they seek in the occupied West Bank and Gaza Strip should largely be drawn along lines that existed before the 1967 war in which Israel captured those territories and East Jerusalem.

Netanyahu, who heads a right-leaning coalition, responded with what amounted to a history lecture about the vulnerability to attack that Israel faced with the old borders. "We can't go back to those indefensible lines," he said.

Picking a fight with Israel could be politically risky for Obama at home as he seeks re-election in 2012.

The brewing crisis in U.S.-Israeli relations dimmed even further the prospect for resuming peace talks that collapsed late last year when Palestinians walked away in a dispute over Israeli settlement building in the West Bank.

Obama and Netanyahu, meanwhile, appear to have reached an impasse after two and a half years of rocky relations. The Obama White House was angered when Netanyahu refused a U.S. demand to halt building Jewish settlements in the West Bank.

Some Israelis have never felt entirely comfortable with Obama, unnerved by his early attempts to reach out to Iran and his support for popular Arab revolutions that have unsettled Israel.

In a pointed comment clearly aimed at Obama's new approach to the long-running conflict, Netanyahu said: "The only peace that will endure is one that is based on reality, on unshakable facts."

Netanyahu, Israeli officials said, was determined to push back hard because the reference to 1967 borders was a red flag that would attract more international pressure on Israel for concessions. A senior Israeli official said Netanyahu felt he had to speak bluntly so he would be "heard around the world."

"There is a feeling that Washington does not understand the reality, doesn't understand what we face," an official on board the plane taking Netanyahu to Washington told reporters.

Despite that, Obama's first declaration of his stance on the contested issue of borders could help ease doubts in the Arab world about his commitment to acting as an even-handed broker and boost his outreach to the region. Another failed peace effort, however, could fuel further frustration.

In line with Netanyahu's stance, Obama voiced opposition to the Palestinian plan to seek U.N. recognition of statehood in September in the absence of renewed peace talks.

The Democratic president has quickly come under fire from Republican critics, who accuse him of betraying Israel, the closest U.S. ally in the region. Pushing Netanyahu could alienate U.S. supporters of Israel as Obama seeks re-election.

Obama may get a chilly reception in a speech to an influential pro-Israel lobbying group on Sunday. Netanyahu is expected to be feted when he addresses the same audience on Monday and then the U.S. Congress on Tuesday.

Obama, in his speech on Thursday, laid down his clearest markers yet on the compromises he believes Israel and the Palestinians must make to resolve a conflict that has long been seen as a source of Middle East tension.

But he did not present a formal U.S. peace plan or any timetable for a deal he once promised to clinch by September.

In Thursday's speech, Obama said: "We believe the borders of Israel and Palestine should be based on the 1967 lines with mutually agreed swaps" of land. While this has long been the private view in Washington, Obama went further than U.S. officials have in the recent past.

Agreed swaps would allow Israel to keep settlements in the West Bank in return for giving the Palestinians other land.

Going into the talks, Netanyahu said he wanted to hear Obama reaffirming commitments made to Israel in 2004 by then-President George W. Bush suggesting that it may keep some large settlement blocs as part of any peace pact.

White House spokesman Jay Carney said on Friday that Obama had said nothing that "contradicts those letters."

Obama on Thursday also delivered a message to the Palestinians that they would have to answer "some very difficult questions" about a reconciliation deal with Hamas, the Islamist group that runs Gaza and which the United States regards as a terrorist group.