Out on bail, ex-IMF chief arrives on Broadway 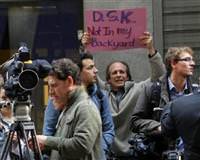 Former IMF chief Dominique Strauss-Kahn was settling into a new, temporary abode on Friday on New York's Broadway but he was a long way from the neon lights and theaters that make the street famous.

Under armed guard and with a security bracelet strapped to his ankle, Strauss-Kahn is stuck at the less glamorous end of the thoroughfare that slices across Manhattan.

It is close to Wall Street and the Ground Zero site of the of September 11, 2001 al Qaeda attacks on the World Trade Center, within the city's security "ring of steel," which includes surveillance cameras and an increased police presence.

Charged with trying to rape a hotel housekeeper, Strauss-Kahn was released on bail on Friday after spending four nights under suicide watch in an 11-by-13-foot (3-by-4 meter) cell at New York's harsh, loud and dangerous Rikers Island jail.

Strauss-Kahn has denied the charges and said he will fight to clear his name.

His new home was arranged by a private security company which Strauss-Kahn is paying to keep him under 24-hour armed guard and electronically monitor him as part of his bail conditions.

Prosecutors have estimated the cost of his security would be $200,000 a month.

The building on the corner of Broadway and Rector Street is next door to Trinity Episcopal church.

Some New Yorkers in the area weren't happy about having such a controversial new neighbor. One man held up a pink cardboard sign that read: "D.S.K. Not In my Backyard."

"With all the press and publicity it's going to be hard to come and go in the building," Debbie Tawil, a resident of the building, told reporters.

Strauss-Kahn, who oversaw the world economy while at the International Monetary Fund, is only allowed to leave his apartment for travel within Manhattan for court appearances, meetings with his lawyers, medical appointments and a weekly religious observance.

His time there will likely be temporary as Strauss-Kahn's wife and defense lawyers are still trying to find another apartment to rent.

Strauss-Kahn's arraignment hearing is set for June 6, when he will formally answer the charges. A trial may be six months or more away. If convicted, he could face 25 years in prison.

His wife, French television journalist Anne Sinclair, had reportedly rented a luxury apartment on Manhattan's Upper East Side in the Bristol Plaza, where a two-bedroom suite costs up to $14,200 a month.

"The reason that we had to move is because members of the press attempted to invade his private residence," Strauss-Kahn's lawyer William Taylor told reporters.

At the Bristol Plaza, Strauss-Kahn would have had goose down pillows, daily maid service and a soaking tub in an Italian marble bathroom. Building manager, Milstein Properties, declined to comment on media reports that it refused to rent to Sinclair after it became aware of the high-profile tenant.

Strauss-Kahn would also not have been the first personality to be confined to an apartment in the swank neighborhood, where just a few blocks away disgraced financier Bernard Madoff was detained in his penthouse. Madoff is now in prison, serving a 150-year sentence for Wall Street's biggest investment fraud.