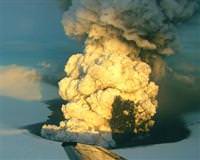 An eruption by Iceland's most active volcano was set to keep the island's main airport shut on Monday, while other European nations watched for any impact on their air routes from a towering plume of smoke and ash.

Experts said they saw little chance of a repeat of last year's six-day closure of airspace, which also hit trans-Atlantic flights, when another Icelandic volcano erupted, although airlines have been warned the new ash cloud will drift.

So far Iceland, particularly the towns and villages to the south and east of the Grimsvotn volcano, have suffered most. Day turned into night when a thick cloud of ash descended on the area, smothering cars and buildings.

The cloud had also begun to drift over the capital Reykjavik by late Sunday evening and the civil aviation authority said the prospects for re-opening the main international airport on Monday were not good.

"Ash cloud is expected to reach North Scotland on Tuesday 24th May. If volcanic emissions continue with same intensity, cloud might reach west French airspace and north Spain on Thursday 26th May," it said in a traffic bulletin.

Iceland's meteorological office said the plume from Grimsvotn, which last exploded in 2004, had fallen to 10 to 15 km in height from a peak of 25 km (16 miles).

But the eruption was much stronger than the one at a volcano further south last year which closed European airspace and halted trans-Atlantic flights, due to worries that particles could get into aircraft engines and cause accidents. The airline industry said it lost $1.7 billion in revenues.

"It could lead to some disruption, but only for a very limited time and only over a very limited area," said University of Iceland Professor of Geophysics Magnus Tumi Gudmundsson.

"We see some signs that the (eruption's) power is declining a bit, but it is still quite powerful," he said, adding that the eruption was the most violent at the volcano since 1873.

Gudmundsson and other vulcanologists said the impact on air travel this time would be more limited as winds were more favourable, the plume's content was heavier and less likely to spread, and authorities had a higher tolerance for ash levels.

Some airlines complained that authorities had been excessively cautious in imposing blanket closures of airspace during last year's eruption.

Icelandair, the main airline on the island, stopped flights on Sunday and said on its website the halt could continue on Monday. It said 6,000 passengers had been affected by cancellations so far.

Dave Mcgarvie, vulcanologist at Britain's Open University, said any ash which reached Britain would be less than last year and added that experience gained since the 2010 eruption would lead to less disruption.

In emailed comments, he said "minor re-routing" should enable aircraft to avoid zones where ash is concentrated.

Grimsvotn lies under the Vatnajokull glacier in southeast Iceland, the largest glacier in Europe.

Areas to the south of glacier have been covered in thick layers of ash and the sun was blocked out for several hours.

"It was like night is during the winter," said Benedikt Larusson, speaking in the town of Kirkjubaejarklaustur. "Now it is a little bit better. Now I can see about 100 metres, but before it was about one metre."