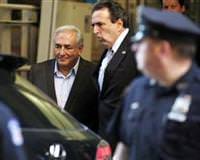 Former IMF chief Dominique Strauss-Kahn was moved on Wednesday from a temporary apartment to a luxurious townhouse in New York's TriBeCa neighborhood where he will await trial under around-the-clock armed guard on charges that he tried to rape a hotel maid.

Strauss-Kahn, who had been expected to be a serious contender to be the next president of France before his arrest, was rushed late on Wednesday to a waiting sport utility vehicle that whisked him to a posh two-story townhouse on a cobblestoned street in TriBeCa, a source close to the case said.

Strauss-Kahn was released on $1 million cash bail and $5 million insurance bond on Friday and taken temporarily to an apartment in New York's financial district after attempts to rent a luxury apartment elsewhere in the city fell through.

He emerged from the temporary apartment wearing a gray suit and blue dress shirt. He was not handcuffed but was surrounded by plain-clothed police and security officers.

Media already were gathered outside the house where Strauss-Kahn likely will spend the next months preparing for his trial. People's silhouettes could be seen through the house's frosted glass windows.

Strauss-Kahn, who spent four nights last week at New York's Rikers Island jail, has denied attacking the maid on May 14 in his hotel room. He has been charged with a criminal sexual act, attempted rape, sexual abuse, unlawful imprisonment and forcible touching. He is due back in court on June 6.

Under the terms of his release, Strauss-Kahn will be allowed to leave the townhouse only to travel within Manhattan for court appearances, meetings with his lawyers, medical appointments and a weekly religious observance.