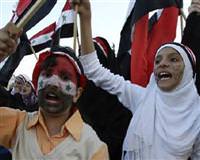 "The authorities are still pursuing the calculated course of using excessive violence and live ammunition to confront mass demonstrations," the organisation said in a statement on Saturday.

Scores of people of all walks of life were also arrested including a doctor, musician, and an amateur boxer, it said.

It said the killings occurred in rural districts around Damascus, in southern Syria, the northwestern province of Idlib, the coast and the central city of Homs. Activists on Friday had put the death toll at eight.

Authorities blame armed groups, Islamists and foreign agents for the violence and say at least 120 soldiers and police have been killed since the protests erupted in March.

Rights groups estimate at least 1,000 civilians have been killed by security forces, the army and gunmen loyal to President Bashar al-Assad over 10 weeks. They said 10,000 people have been arrested, with beatings and torture a common tactic.

Leaders of the G8 powers meeting in France on Friday condemned the violence and called on Damascus to respond to the Syrian people's "legitimate demands for freedom."

Washington and the European Union have already imposed sanctions against Assad and other Syrian officials. But Russia and China have been more reticent in denouncing Assad.

The Syrian Observatory for Human Rights said that the bodies of seven protesters killed on April 29 near the southern city of Deraa were handed to their families on Saturday, including two which it said showed marks of torture.

"We have the testimony of hundreds who were tortured, including scores of videos," Observatory Director Rami Abdel Rahman said by telephone from Britain.

Witness reports of the violence, and official accounts, are hard to verify independently because Assad's government barred most international media from the country not long after the start of the unrest, which was sparked by democratic revolutions in Egypt and Tunisia.

The biggest demonstrations typically occur on Fridays after Muslim prayers and they have also generally been the deadliest. But the bloodshed this week appeared to be on a lesser scale than witnessed recently.