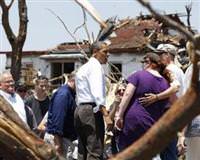 President Barack Obama promised victims of the deadliest U.S. tornado in 65 years that the federal government would help them rebuild, saying on Sunday it was a national tragedy.

"The cameras may leave. The spotlight may shift," he told a memorial service for the 139 known victims of the May 22 twister. But the federal government "will be with you every step of the way until Joplin is restored and this community is back on its feet," Obama said to a standing ovation from survivors.

Before the service in an auditorium at Missouri Southern State University, Obama rolled up his sleeves and toured a disaster scene where crushed cars, piles of wood, clothing and a broken dishwasher lay helter-skelter amid the debris on lots where houses once stood.

The president, who returned on Saturday night from a six-day trip to Europe, vowed to cut through any federal red tape to help with rebuilding that he predicted would be "a tough, long slog."

"This is just not your tragedy," he said after meeting survivors. "This is a national tragedy and that means there's going to be a national response."

The tornado was the deadliest single twister in the United States since 1947. In addition to the at least 139 people killed and more than 900 injured, scores are still unaccounted for a week later.

The tornado churned through a stretch nearly a mile wide, damaging about 8,000 buildings in Joplin, a city of 50,000 in southwestern Missouri.

Standing amid the rubble under a scorching sun, Obama told reporters that he had heard some "harrowing stories" as well as some miraculous ones.

He said he had spoken with an 85-year-old man, Hugh Hills, who had just taken a chicken pot pie out of the oven when the storm was approaching.

"He went into the closet and came out without a scratch," Obama said. Hills, before meeting the president, stood outside his mostly destroyed house holding a large American flag on a pole, his family around him.

"These are just things," a woman nearby said, pointing to the debris and the house. "We're just glad Grandpa made it."

The president got a bird's eye view of the damage from his plane before landing. He was accompanied on the tour by Missouri Governor Jay Nixon and Senator Claire McCaskill of Missouri, both fellow Democrats.

"As president, I can promise you your country will be with you every single step of the way," Obama said at the memorial service. He said he had made the same commitment to other communities devastated by tornadoes in recent weeks and months, including Tuscaloosa, Alabama.