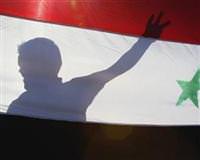 At least three civilians were killed on Monday when security forces entered the town of Talbiseh in central Syria to crush dissent against President Bashar al-Assad, a rights group said.

The deaths brought to 14 the number of civilians killed in the area around the city of Homs, north of Damascus, since troops and tanks surrounded towns and villages in the region on Sunday, the Syrian Observatory for Human Rights said.

Homs has seen some of the biggest demonstrations against Assad since protests broke out in southern Syria in March and spread across the country, posing the most serious threat to his 11-year rule.

Assad's military clampdown on the protests has drawn condemnation and sanctions from the United States and European Union. Rights groups say 1,000 civilians have been killed and 10,000 arrested in the crackdown.

Syria blames the violence on armed groups, Islamists and foreign agitators, saying more than 120 police and soldiers have been killed in the unrest.

Talbiseh, 10 km (6 miles) north of Homs, and several other towns and villages nearby, are the latest population centres to be taken over by the army in the military crackdown.

"Shelling began at five in the morning, concentrating on a hill in the middle of the town (Talbiseh)," said the witness, a resident who managed to leave the town.

He said troops and security forces took over the main clinic, a tactic the military has used when seizing control of other urban centres, and that wounded people were taken to a cultural center for treatment.

Witness reports of violence in Syria, as well as official accounts, are difficult to verify independently because the government barred most international media from the country not long after the start of the unrest in March.

Protests in Syria have continued despite the increasing force used to crush demonstrations that began with calls for political freedom and an end to corruption and are now urging the removal of Assad.

But the two main cities of Damascus and Aleppo, where security forces are heavily deployed, have still not seen major sustained protests.

The president has responded to the demonstrations by intensifying a military crackdown. The 45-year-old leader also lifted emergency law and promised reforms but his opponents say there has been no change in Syria where the ruling Baath Party has banned all opposition and political freedoms since 1963.

Neighboring Turkey, which had improved ties with Syria but has begun to criticize Assad in recent weeks, said the longer reforms were delayed the more comprehensive they would have to be, and greater the danger to Syrian security.

"It is clear that the political will has been reconfirmed," Davutoglu told Reuters. "But we will see what will be the action. This is more important."

The witness in Talbiseh, a university teacher, said thousands of residents escaped to Neighboring villages during several hours of respite on Sunday evening from machinegun fire. Scores of men were arrested before he fled around noon, he said.

Internet, landlines and mobile phone networks with Rastan and Talbiseh remained cut, a step commonly used by the military before they storm urban centres, activists said.

In the southern Hauran Plain, cradle of the uprising, residents said troops broke into houses and conducted mass arrests in the town of Hirak, 20 km from the border with Jordan.