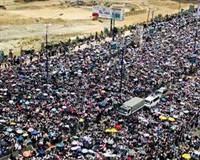 Several top Yemeni officials injured in an attack on the presidential palace Friday have been flown to neighboring Saudi Arabia for treatment, a medical source said Saturday.

The speakers of both houses of parliament, the deputy prime minister and other officials were evacuated, the source said without offering details on the conditions of the officials.

Media reports on Arab broadcasters said the deputy prime minister suffered serious injuries when the palace was hit by shells.