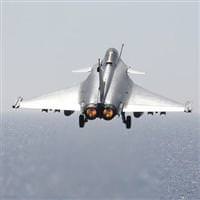 NATO and Russian fighter aircraft will take part in a counter-terrorism exercise this month designed to prevent attacks such as those on the United States on Sept. 11, 2001, NATO said on Wednesday.

NATO officials said the exercise, to be held over Poland and the Black Sea on June 7 and 8, would be the first of its kind, and a demonstration of increased cooperation between former foes that were more used during the Cold War to shadowing each others' aircraft as potentially hostile intruders.
A NATO statement said operation Vigilant Skies 2011 would involve a Polish aircraft acting as a renegade taking off from Krakow on June 7 and being intercepted by Polish fighters, which would hand over their mission to Russian fighters.
After a struggle in the cockpit of the hijacked plane, in which terrorists would be overpowered but the plane's navigation system damaged, the aircraft would be guided back to Poland by the Russian fighters.
A second scenario the next day will see a flight plan deviation and loss of communications with a hijacked Turkish aircraft over the Black Sea, followed by coordinated interceptions by Turkish and then Russian fighters.
NATO said the aim would be to demonstrate the NATO-Russia Cooperative Airspace Initiative (CAI) designed to prevent attacks by civilian aircraft such as those on the World Trade Center in New York on Sept. 11 2001.
"This is the first such counter-terrorism exercise held between NATO and the Russian Federation and will be a major milestone for reaching operational capability of the CAI system," the NATO statement said.
"The CAI will improve air safety for the thousands of passengers using international flights between NATO airspace and Russian airspace each day, and the millions of inhabitants on the ground," it said.
The new system, coordinated from centres in Warsaw and Moscow, with additional local coordination sites in Russia, Norway and Turkey, is intended to provide a shared radar picture of air traffic to enable early warning of suspicious air activity through agreed procedures, the statement said.
"In situations when an aircraft starts behaving erratically, the air traffic coordination system offers increased information sharing and communications to ensure rapid joint responses to terrorist threats," it said.
NATO and Russia, both of which have been attacked by Islamist radicals, have made counter-terrorism cooperation a priority as part of a post-Cold War rapprochement that has steadily strengthened in spite of a temporary freezing of ties after Russia's 2008 war with Georgia.