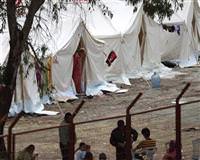 Only a line of barbed wire separates Syria from Turkey along this stretch of their 800 km border and villagers on both sides have used the hidden paths crisscrossing the hills to visit each other for years.

But what was once a casual trip is now to them a matter of life or death.

Mehmet is one of those with relatives on the Turkish side who can smuggle him into the village of Guvecci for food and supplies to take back to his hungry family in Syria.

"My wife and 11 children are on the other side. I came to get them food," the 55-year-old farmer told a journalist in the sitting room of a relative after arriving early on Sunday.

"We fled last night as the shelling intensified and tanks were on the edge of Jisr al-Shughour," he said.

Just 20 km (12 miles) away, Jisr al-Shughour has been under assault by loyalist forces that residents say are commanded by President Bashar al-Assad's brother Maher, following a pattern witnessed in other cities and towns that dared to demand political freedoms and an end to Assad's autocratic rule.

The strategic town, on the road between Syria's second city Aleppo and the country's main port of Latakia, had seen large demonstrations, with residents describing a mutiny by security forces whom they said fought other troops to try to prevent the killing of civilians.

"We heard of the atrocities Maher's men have committed in Sarmaniya and the other villages and we could not stay in Jisr. We also had no water and no food left," said Mehmet.

While Mehmet and a handful of others plan to return, more than 5,000 Syrians have opted to seek refuge in border camps set up by the Turkish government where food, shelter and medical help is available.

They say hundreds more are hiding in the hills waiting to cross.

A village of about 500 people, Guvecci has become a hub of frantic activity as the trickle of refugees becomes a flood.

Tents have been pitched at what has become the semi-official crossing point to shield refugees from the sun and minibuses and ambulances hurtle back and forth shuttling the refugees to the camps and the injured to hospitals.

"The Red Crescent is now preparing a fourth camp, which will be close to the first. At the moment they are levelling the ground. It will have a capacity of around 2,500," said UNHCR spokesman Metin Corabatir.

The government has forbidden media access to the refugees on the grounds of protecting their privacy but reports are gradually coming out.

"The shelling has killed 11 people. Those who are lucky are being transported to Turkey, but it is dangerous. The rest are bleeding to death," said Mehmet.