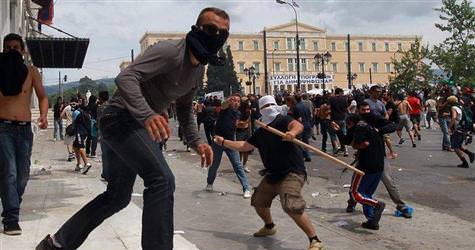 Stone-throwing Greeks clashed with police and tens of thousands of protesters marched on parliament on Wednesday to oppose government efforts to pass new austerity measures for the debt-stricken euro zone state.

Unions representing half the five-million-strong workforce also launched a nationwide strike, shutting ports, schools and other basic services in the Mediterranean state.

Prime Minister George Papandreou must push through a new five-year campaign of tax hikes, spending cuts and sell-offs of state property to continue receiving aid from the European Union and International Monetary Fund and avoid default.

He not only faces public protests and resistance from a conservative opposition that has surpassed his Socialist party in opinion polls, but a few backbenchers in his own parliamentary grouping are also threatening to reject the plan.

Political analysts said he would be able to push through the package with support from his PASOK party and possibly a handful of opposition deputies, but that protests had introduced some uncertainty. One PASOK deputy defected on Tuesday, reducing the party's number of seats in parliament to 155 out of 300.

Thousands of activists and unionists converged on the central Syntagma square on the parliament's front steps to try to stop lawmakers from entering to debate the bill they hope to pass by the end of the month.

"Thieves, traitors!" many chanted. "Where did the money go?"

"These measures are not taking us anywhere. They only lead to unemployment, hunger and poverty," said Panayotis Dounis a 60-year-old pensioner. "We wouldn't be here if the politicians had made sacrifices as well. We are absolutely disappointed."

About 1,500 police closed a large part of the city centre and erected two-metre metal barricades in front of the assembly, creating a corridor to hold back protesters as lawmakers drove up to the building in official limousines.

Riot police fired several rounds of tear gas at dozens of masked youths who pelted them with rocks and a few petrol bombs. Several activists also hurled oranges at Papandreou's car as he drove past, a police official said.

Several groups in the protest clashed between themselves. Police said one person was injured and they detained 40 people.

"CRUEL AS A TIGER"

The new austerity package foresees 6.5 billion euros ($9.4 billion) in tax hikes and spending cuts this year, doubling measures agreed with bailout lenders that have pushed unemployment to a record 16.2 percent and extended a deep recession into its third year.

With those and other measures worth total savings of 28 billion euros through 2015, it also aims to raise 50 billion euros by selling off state-owned firms.

Papandreou appealed for national consensus on the laws, on which hang the EU and IMF release of a further 12 billion euros in aid next month that Athens needs to pay off maturing debt or face default.

"We are at a historically crucial moment ... and I believe that national consensus is important for the country's interest," Papandreou told President Karolos Papoulias during a meeting. "We will proceed with the responsibility for the necessary decisions to see the country exit the crisis."

Papandreou was planning to talk to party leaders later on Wednesday and then make a statement, a government official said.

On Tuesday, euro zone finance ministers failed to reach agreement on how private holders of Greek debt should share the cost of a new bailout for Athens worth an estimated 120 billion euros before a June 23-24 summit.

The European Central Bank opposes such a move, saying that if such participation is involuntary it could be deemed default that could shock markets and put weaker euro states at risk.

The lack of agreement pushed the cost of insuring Greek debt against default to a new record high on Wednesday, while shares in Greek banks fell 7 percent on fears of political uncertainty.

The PASOK deputy who defected said he could not back the package. "You have to be as cruel as a tiger to vote for these measures. I am not," George Lianis said in a letter to Parliament Speaker Filippos Petsalnikos on Tuesday.

Another PASOK member said he would vote against it. But analysts said the party, which still holds a majority, would pass the package by the end of the month before working on another set of laws on how to implement it.

"My gut feeling is that at the end of the day they will get enough MPs... I'd say there is a 70 percent chance that it will go through," said Diego Iscaro, IHS Global Insight.

"The other option (voting it down) would be quite destabilising. That will drive MPs to vote for it."

The cabinet is also expected to survive the turmoil in the short term. A poll on Sunday showed 62 percent of Greeks expect the government to call early elections before its term ends in 2013, although 59 percent thought they did not need a vote now.